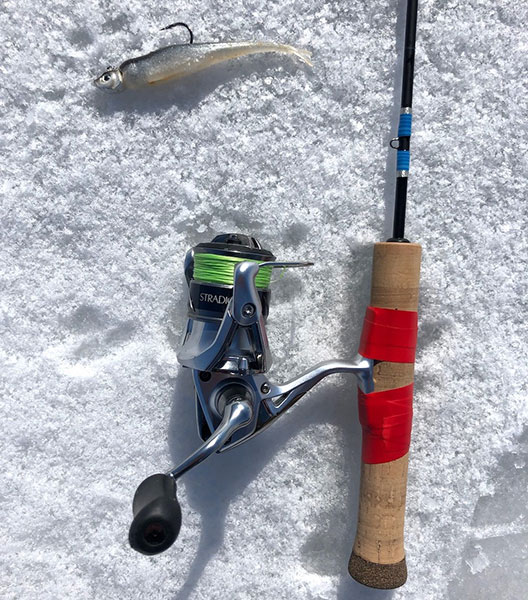 Ice fishing missions frequently greet you with soul-stirring sunrises and profoundly peaceful surroundings – and numb hands. Thankfully, the popularity of the wintery pursuit has bred excellent angling technology—things like valuable fish-finding sonar, plus outerwear and gloves that keep your extremities warm and dry.

But what happens when forced to remove your gloves to perform basic tasks such as constantly replacing baits? Tying knots and rigging baits become exponentially more difficult (and painful) when bare hands lay exposed to the elements. In short, cold hands impair fishing performance. And when you’re watching water freeze in your ice rod guides, “cold” takes on a whole new meaning.

“If I can tie on one little softbait at the start of the day and catch fish with it for hours—without having to remove my gloves and constantly re-rig—I’ve already had a great outing,” suggests Jamie Bruce, an exceptional ice angler and tournament bass champion from Kenora, Ontario.

Among the first anglers to shuffle out across a tenuous veneer of frozen water each winter, Bruce has hooked dozens of wintertime crappies on a singular jig and softbait combination most anglers have yet to contemplate.

“We sort of discovered the incredible advantages of ElaZtech for ice fishing by accident,” says Bruce. “Had some baits sitting out in the cold and thought they were toast. Found that the material eventually freezes up in bitter air temps. But we also found that if you just give the bait a nice stretch, it immediately returns to its natural shape—just as soft, lively and durable as right out of the package.

“Even in super cold water,” adds Bruce, “ElaZtech stays nice and pliable and almost infinitely fishable—as in, one bait can last you an entire day of fishing, or more. And we already knew about its buoyancy. That when rigged on a jighead, the bait always hovers at that perfectly natural horizontal posture, suggestive of a living thing.”

From his finesse bass fishing experiences, Bruce realized he could do a little creative softbait surgery and craft smaller panfish-sized morsels with perfect tail-action, while benefitting from ElaZtech’s astonishing resilience on the hook. 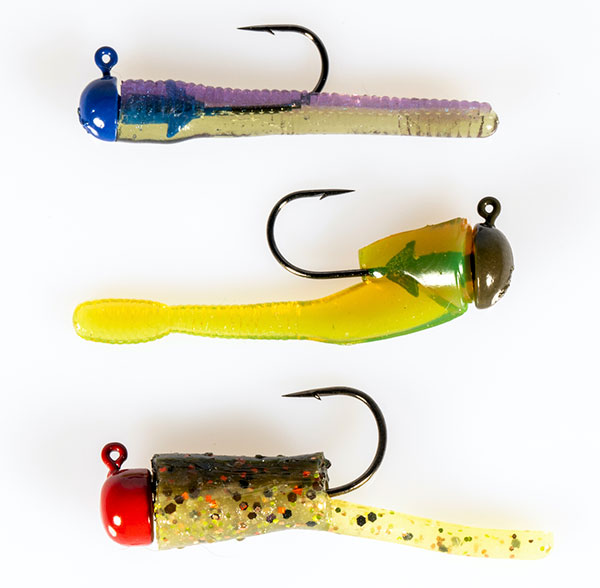 “These days, we’re pretty mobile on the ice, tracking and following moving schools of crappies, walleyes and big lake trout with live-sonar units. You need an efficient bait that can be deployed fast; one that doesn’t require a lot of maintenance between fish. You want to get down fast, stay down and make hay while the school’s hot.

“With crappies, you might have just a three-minute window of fish activity before they scatter, or the school regroups. The last thing you want to be doing is digging in your bag to find a new bait because a fish nipped the tail off. Happens constantly with traditional soft plastics—sometimes you have to re-bait after every panfish. But that simply doesn’t happen with ElaZtech. Imagine fishing one softbait on the same jig, all day long; never having to remove your gloves or getting cold fingers.” 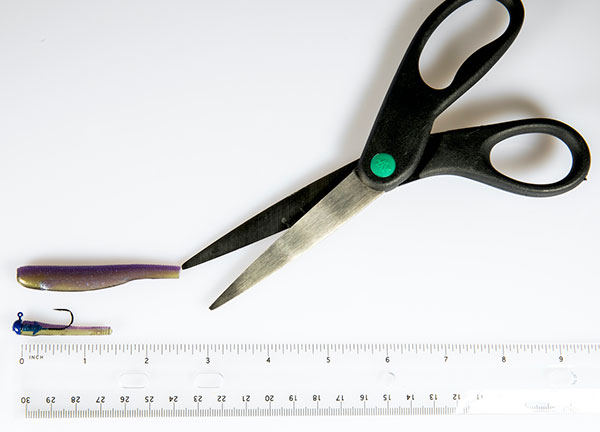 To create his favorite hardwater crappie concoction, Bruce trims the tail off a Smelt or Meat Dog pattern Z-Man Finesse ShadZ. The remaining razor-thin 1-1/2- to 2-inch tail section is threaded onto a compact mushroom jighead or tungsten VMC Tubby Jig. He applies one drop of superglue to the hook-shank or jig neck before securing the bait almost permanently in place.

“You can do the same thing with baits like the Hula StickZ, TRD TicklerZ or even the TRD TubeZ,” Bruce explains. “Or slice off one leg off a TRD HogZ, to make a more flattened, leech style bait. All these little tail sections are super-thin, soft and kick like crazy when you jig.”

Bruce suggests a nice, sharp pair of mini scissors for easily cutting through the resilient ElaZtech material. “All you want to do is snip a single tentacle off some of these baits, leaving a thicker chunk of material for a head, which makes it easier to secure to a jighead. Give it a nice big stretch to shed any salt, add bait buoyancy and soften up the material, which frees it up for even more lively movement.

“I like to drop the bait down, so it hovers just a foot above the crappies, and let them chase as you give it little tail-twitches with your rodtip. When a fish starts reacting, you’ll want to slowly elevate the bait, making the fish hunt it down. Watching the whole drama on a sonar or LiveScope screen really adds to the excitement. And other than a wayward pike, you never have to worry about the bait getting its tail chewed off.”