Like many Hoosiers interested in their genetic ancestry, DNR fisheries biologists and Purdue University researchers are looking into the genetic makeup of a species of fish in northern Indiana's Lake Webster.

The results could have a bearing on how muskies, a popular sport fish, might affect the future of the DNR's muskie stocking program.

"We take eggs from adult muskies captured at Lake Webster in Kosciusko County each spring, fertilize and hatch them, and then grow the fry up to 10-inch fingerlings for stocking lakes throughout the state," said Randy Lang, DNR hatchery supervisor. "Without healthy brood stock, the entire muskie program could be in jeopardy."

Indiana Muskie Fishing is Even Better Than Most Anglers Realize 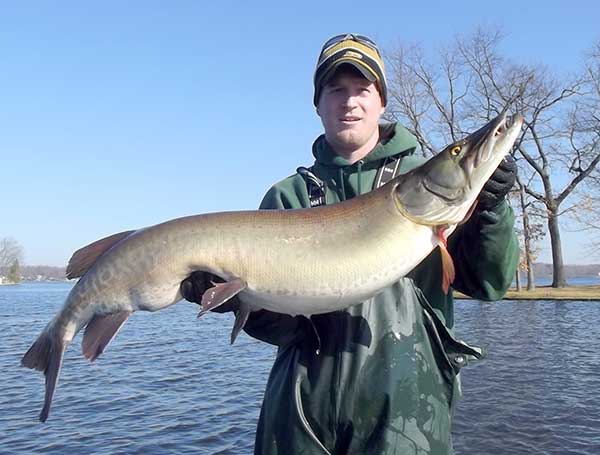 Are Indiana’s muskie lakes starting to get the respect it deserves?

Maybe. But not as much as muskie biologist Jed Pearson believes they should.

Webster Lake has long been known as the crown jewel of Indiana muskie fishing and it’s been recognized regionally, and to some extent, nationally. It and nearby Barbee Chain and Lake Tippecanoe gets most of the attention. All of those lakes are in Kosciusko County.

“We think it’s important to get more information out there about the quality of fishing we have here,” said Pearson. “We’re seeing it in our surveys, but now it’s a matter of getting anglers to try other waters and see what they are missing.”

The Indiana Classic has been held there for several years, attracting avid muskie anglers from around the region.

The Michigan DNR, in partnership with the Michigan Muskie Alliance, continues to investigate the state's muskellunge fisheries through its online angler survey.

The 2017 Muskellunge Angler Survey is gathering information about muskellunge angler demographics and catch data. Muskellunge anglers have been surveyed since 2014, but only online since 2016. Traditional methods, including creel and postcards, have not been as successful at collecting this type of information. The current survey can be found on the DNR's website at www.michigan.gov/muskie.