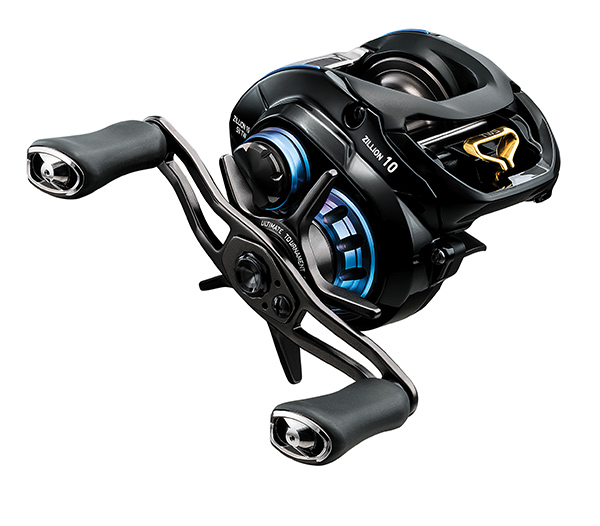 The Japanese engineered and manufactured Zillion 10.0 yields technique-specific brilliance, especially in the realm of bass fishing. It’s high speed retrieve lends perfection for fishing topwater baits, like frogs and buzzbaits. Daiwa’s Zillion 10.0 is equally as proficient burning lipless crankbaits and other hardbody lures when retrieval speed is the key.

After the hookup, the Zillion 10.0 also gives you the power and velocity to get fish up and out of precarious environments. Pitch a jig into timber, along pilings or in deep vegetated pockets, and that bass better come boatside quickly, or lose it back to the lake. Daiwa’s Zillion 10.0 gives you the authority to bring that fish home.

Due to popular demand to add a fast reel back to the Zillion line up where we used to have a 9.0:1 in Zillion, we accomplished the wishes of the public and developed the faster more powerful Zillion 10.0:1 reel, said Daiwa Field Marketing Manager Marc Mills. “Frog guys and Lipless guys you are going to love it!”

From a design standpoint, Daiwa incorporated premium componentry, all aimed at delivering speed and power in a lightweight, comfortable and durable reel. For starters, Daiwa’s signature G1 Duraluminum SV Spool is perfectly balanced, light and efficient, and conceived for making controlled casts.

While on the topic of aluminum, the Zillion 10.0’s exquisite innerworkings are housed in a frame with side plates constructed of the same premium alloy.

The Zillion 10.0’s performance is further bolstered by Daiwa’s exclusive T-Wing System (TWS). The “T” aperture allows line to flow freely on the cast, reducing the sharp angles and friction that cause line to stall when exiting the reel. With the Zillion 10.0, on the retrieve, the line drops into the narrower, lower channel of the T-Wing for even greater distribution across the spool width.

Daiwa's exclusive and comfortable Swept Handle moves the paddles closer to the rod's centerline. The result is less wobble of the rod and reel in your hand as you crank. That means less wasted energy and a more powerful retrieve.

Masters at delivering premium, technique-specific reels, Daiwa dares you to find a lighter weight, more effective tool for burning baits and bringing trophies back to the boat. We dare say the Zillion 10.0 has no challengers.