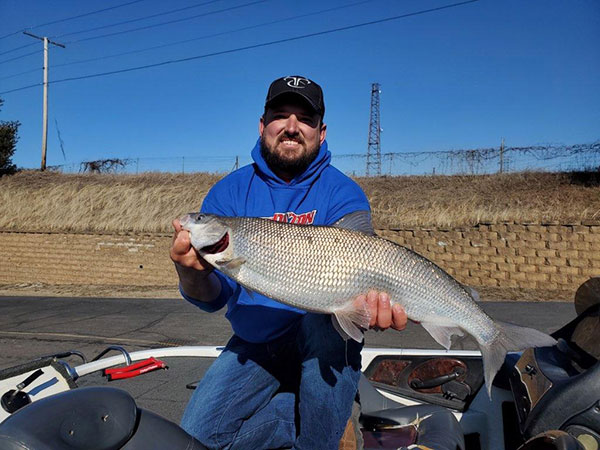 Phil Duracz and Clint Marler were about to call it a day Saturday when Phil decided to check out one more spot on Lake Michigan near Portage, Ind.

It proved to be a good move. He hooked and landed the Indiana state record whitefish that weighed 9.34 pounds, nearly two pounds heavier than the former record.

It was around 2 p.m. when he spotted fish on his Garmin Electronics in about 50 feet of water.

“I dropped down my bait down there, popped it off the bottom and she ate it,” recalls the Chesterton angler.

Whitefish, also known as “humpbacks,” are related to the salmon family although not as revered as their salmon or trout cousins. But they are considered popular table fare. 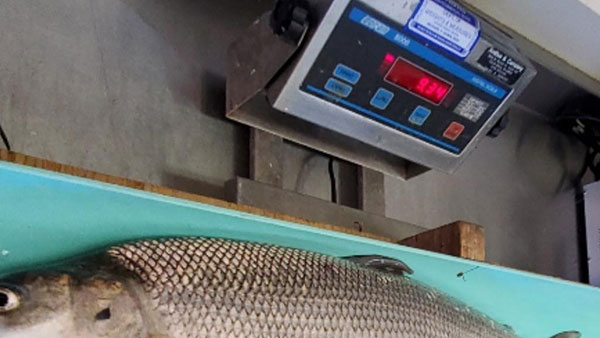 Duracz’ fish measured 29¼-inches long with a 16¼-inch girth. The record has been broken 7 times in the last 9 years, but Lake Michigan Biologist Ben Dickinson says this one may last awhile.

“That’s a heckuva whitefish,” he said. “I imagine it will be awhile before that one is broken.”

Duracz and Marler were casting from Phil’s 21-foot Ranger bass boat about a quarter mile offshore when the fish bit.

“I thought it might be a small lake trout because we caught several of those and lakers tend to fight harder,” Duracz says.

But this time there was a problem. There was no net in the boat.

“When I told Clint it was a state record, he looked at me and said, ‘Really?’” Duracz said jokingly. “Then he reached in the water and bear-hugged the fish into the boat.”

Duracz says luck, thanks to his daughter, Lilly, may have played a role.

“Before I left to go fishing, she made me wear a matching sweatshirt to hers,” he says. “She said it would bring me good luck.”

Luck may have helped Duracz catch the state record, but the whitefish was no fluke. He and Marler have spent the past few years learning how to take advantage of the early season whitefish fishery. 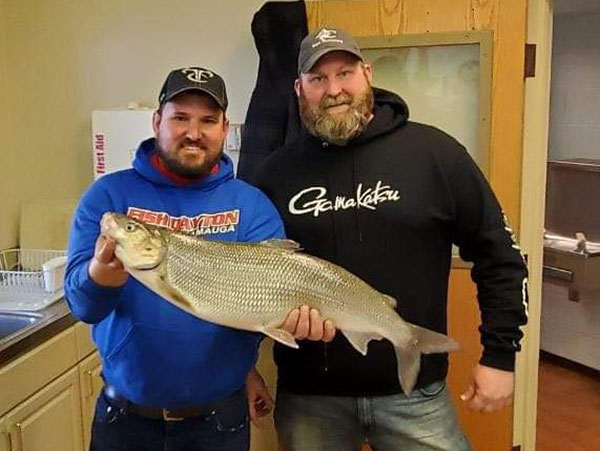 “We find little isolated schools of whitefish and lake trout,” he says. “It’s a lot of fun to catch them, especially on bass tackle.”

Some fish are caught on blade baits like the Silver Buddy, but this monster bit on a white, Berkley 3.5 Power Swimmer rigged on a half-ounce jig head.

The Power Swimmer is a bass lure that obviously works on Lake Michigan fish as well. But the key is just finding the fish.

“We idled around watching the graph,” he describes. When we saw fish on the graph, we locked our Minn Kota Electric Motor on Spot Lock then dropped down immediately. It doesn’t take long to get them to bite.”

Once the bait makes contact with the bottom, he sweeps it up and then lets it fall back. That’s usually when the bites occur.
We caught 8 lakers and 2 whitefish Saturday doing that,” says Duracz.

Dickinson says whitefish move in shallow, along with lake trout, during the fall to spawn and hang around the shoreline until spring warmup moves out the forage. Like lakers, they spend a lot of time on the bottom in deeper, colder water.

Although more anglers are discovering the fishery, there is some evidence to suggest that the southern Lake Michigan whitefish fishery is becoming more prolific.

“There is talk lake-wide that there has been a shift in the ecosystem and the whitefish diet,” says Dickinson. “They typically feed on invertebrates but those have disappeared, so the fish are targeting gobies. And this time of year, there are a lot of gobies near the Indiana shore.”

Michigan’s record whitefish weighed 14.28 pounds but was caught from Lake Superior in 1993.