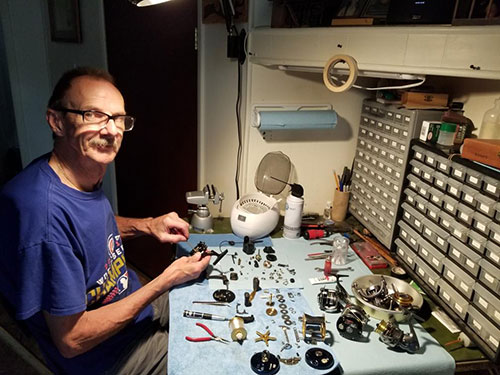 If you’re shopping for a reliable spinning reel, choose Daiwa. And if you’re after a quality baitcaster, choose Shimano.

That’s the opinion of a Michiana reel service provider who sees about 200 reels a year.

Given the popularity of Shimano spinning reels, one might think just the opposite.

But John Meyer, the reel repairman for Clear H2o Tackle who works from his home in Edwardsburg, Mich., says he sees fewer problems with Daiwa spinning and Shimano baitcasters.

“Regardless of what dollar-wise you’re going to invest, those two are probably the best and most reliable that I see,” he said. “I don’t see a lot of difference in the brands of reels, but those two seem to be best.”

Even so, he said that paying $500 for a reel is overkill. Based upon what he sees inside the reels that he repairs, a $150-$200 baitcast or spinning reel are pretty good quality. Reels built today, he added, are better than those some 20 years ago.

“By the same token much depends upon how they are used and how badly they are neglected,” he added.

For example, if you fish braided line on a reel, take heed. Meyer says the stress you put on them can be a problem.

“Braid is hard on reels,” he noted. “People get snagged on bottom and start pulling, but it’s not easy to break that stuff. Something has to give, and you can damage the gears inside.”

Trailering with your rods and reels on the deck can be damaging, too.

“If it rains and you have a little sand in the carpet it can find its way into the reel,” Meyer said. “Anytime you can keep your reels out of the elements, it’s a good thing.

Spinning reels are susceptible to damage when on the boat deck.
“It can damage the bails when they are bounced around on the deck,” he said. “Some people think that when that reel acts up, it’s the bail spring when it’s often a matter of a bent bail from abuse.”

Meyer recommends anglers clean their reels every two years or more often if they are left in sand or grit.

“If you’re going to clean them yourself, be careful when you open the reel and start moving pieces,” he said. “Take pictures with your phone so you have a visual of how to put them back.”

Reels need grease; not a lot, but some, he added. He recommends you use a good reel grease and light oil.

A better solution is to drop off your reels at Clear H2o and have John do it. You also can call the shop to find out how you can ship them to get them cleaned or repaired and shipped back to you.

Meyer only charges for his time and whatever parts cost him. You can call Clear H2o at 269-414-4131 for more details.