License applications for the 2023 spring turkey hunting season are available now through Feb. 1. Applications are $5 and can be purchased at any license agent, online at eLicense or through the new Michigan DNR Hunt Fish app.

The season runs April 22 through June 7. For the breakdown on season dates and regulations see the 2023 Spring Turkey Digest. For questions about applying for a spring turkey license, call 517-284-WILD (9453). 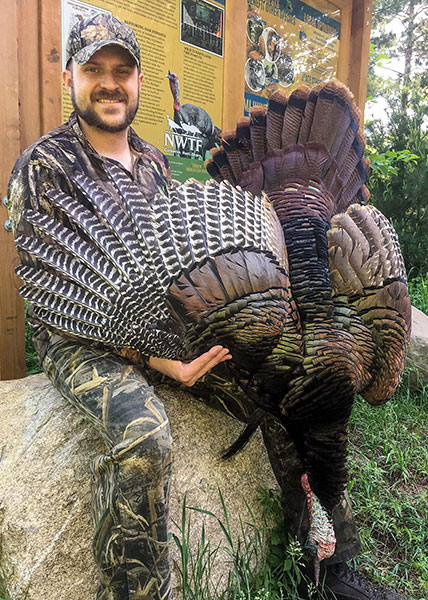 Hearing wild turkeys gobbling and clucking as you step out into the backyard early in the morning is common for many Michiganders now, but it wasn’t always so.

As we mark the annual holiday that revolves around turkey, let’s look back and celebrate these birds’ remarkable return from near extinction, often called one of the country’s greatest wildlife conservation success stories.

There are more than 6 million wild turkeys in the United States today, but seeing – or hearing – one was rare as recently as 50 years ago.

In Michigan, wild turkeys had been plentiful prior to the arrival of settlers, with an estimated 94,000 in the state at that time.

By the 1950s, Michigan’s wild turkey population had disappeared due to unregulated hunting and habitat loss.

Bringing turkeys back from the brink

Thanks to the efforts of a committed cadre of conservationists over the last 70 years, 200,000 wild turkeys now call Michigan home. They can be found in parts of every Lower Peninsula county and areas of the Upper Peninsula.

By 1965, the turkey population had rebounded enough that hunting was allowed. Today Michigan ranks sixth in the nation for number of turkey hunters, with consistently high hunter success and satisfaction rates.

Michigan’s spring turkey season is open in every county, and fall hunting is open in many areas of the state.

During the 2022 spring season, hunters harvested 12,531 wild turkeys in 91 of 92 Indiana counties.  This spring’s harvest is only a 1.7% increase compared to that of the 2021 spring season. Like last year, only one county did not harvest any turkeys during this spring’s hunting season.

During the spring 2021 turkey season, hunters harvested 12,320 wild turkeys throughout 91 of Indiana’s 92 counties.

Check spring turkey drawing results at Michigan.gov/DNRLicenses or call 517-284-9453 (WILD). Licenses can be purchased online or over the counter at license retailers.

Applied for a license but were not drawn? Mark your calendars! Hunters who were unsuccessful in the drawing can purchase a leftover license on Monday, March 14 at 10 a.m.

Didn’t apply for a license? Remaining leftover turkey licenses will go on sale to everyone Monday, March 21 at 10 a.m. Licenses are sold on a first-come, first-served basis. There is no guarantee that leftover licenses will be available for any hunt unit.

Looking for a license that provides flexible hunting options? Hunt 0234 might be for you. Learn more about this hunt and season dates in the 2022 Spring Turkey Digest.