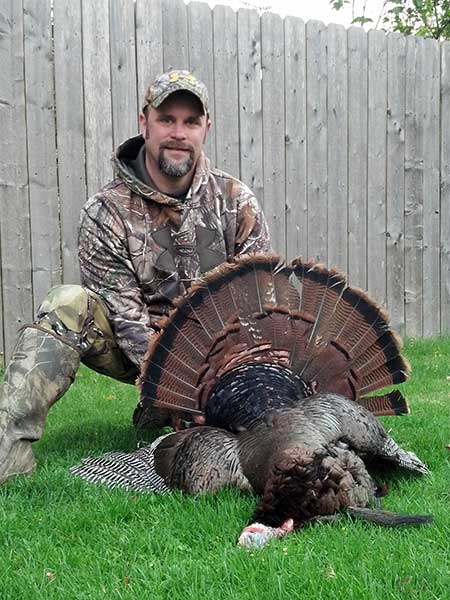 Ryan Hershberger has put northern Indiana on the map in the minds of the nations avid turkey hunters.

Not only did he win first place in friction calls, but his call was cited as the Grand National Champion of all calls entered.

In other words, his calls sounded more realistic than all others in the competition.

Not bad for a guy who paints houses for a living and only has made turkey calls since 2007, just five years after he started hunting gobblers.

Registration begins March 21 and runs through April 1. Youth hunters must be younger than age 18 on the day of the hunt. 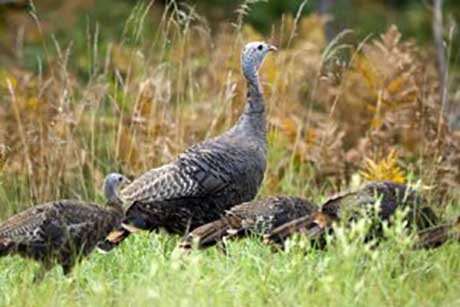 The comeback of the wild turkey is one of the greatest wildlife conservation stories in America's history. Today, there are more than 7 million wild turkeys in the United States; however, there was a time when the sighting of a wild turkey in this country was rare.

Wild turkeys were a common element in Michigan prior to the arrival of European settlers. In fact, wild turkeys have been in North America for a long time. Turkey bones dating back 50,000 years have been found in caves in the eastern United States. During the pre-Columbian times of Michigan's history, it is estimated that more than 94,000 wild turkeys roamed the state. The wild turkey is native solely to the New World, indigenous to the wilds of this continent, and is the ancestor of all domestic turkeys worldwide.

By 1900, the wild turkey was absent from every county in Michigan. As European settlers cleared the land to build cities, the turkey's preferred habitat became scarce. In addition, turkeys were heavily exploited and sold at market.

Luckily, in the early 20th century, the conservation movement began to pick up steam in the public consciousness and in the government. Laws, like the Lacey Act of 1906, regulated market hunting. The Weeks-McLean Act of 1913 allowed the federal government to set hunting seasons.

In 1916 a Migratory Bird Treaty was signed between the U.S. and Great Britain (on behalf of Canada) protecting birds that migrate across political borders. Though wild turkeys do not migrate, they still benefitted from the protections set forth by the treaty and from habitat work completed on behalf of migratory species.

In the early 1900s, conservationists set out to re-establish wild turkeys, but their efforts met with limited success. In 1905, Cleveland Cliffs Mining Company released turkeys on Grand Island, off Munising in Lake Superior, but the birds didn't survive. The earliest documented attempt by the DNR to re-establish turkeys in Michigan was in 1919 and again in 1920.

In those two years, 65 hand-reared wild turkeys were released at the Sanford Game Refuge. Birds and ìturkey signî were seen in the vicinity until 1925, but the refuge manager reported that the birds were ìpopped-offî by violators. More unsuccessful releases were made through the late 1930s in southern Michigan.

In 1937, a national coalition of conservationists - virtually all of them hunters, backed by the sporting arms and ammunition industries - persuaded Congress to direct the receipts from an excise tax on those items into a special fund to be distributed to the state for wildlife restoration. Had it not been for this key legislation, the Federal Aid in Wildlife Restoration Act (also known as the Pittman-Robertson Act of 1937), wild turkeys and a variety of other wildlife would have been reduced to nothing more than part of local lore and national legend. With this type of nationwide support, there was increased interest in wild turkey restoration.

In the spring of 1954, the DNR purchased 50 turkeys and 400 eggs from the Pennsylvania Allegheny Wild Turkey Farm. The 50 birds were released at six sites in the Allegan State Game Area, and the eggs were incubated at the Mason State Game Farm. Not all birds and eggs survived, so additional restoration attempts continued. By 1964, approximately 2,000 free-ranging birds had become established in Michigan's Lower Peninsula.

During the late 1950's, the rocket net was adapted, from similar nets used in Europe to capture waterfowl, for use on turkeys. This new wildlife capture technique revolutionized the ability of resource managers to live-trap wild turkeys for restoration efforts. Since the use of rocket nets in Michigan began, wild turkey live-trapping and translocation has been part of Michigan's management program.

In 1983, the DNR, working together with many partners, acquired wild turkeys from Iowa and Missouri for translocation to southern Michigan. Since 1983, numerous releases of wild trapped birds from other states and newly restored southern Michigan sites have occurred, and the population has expanded to historic levels. For the first time in history, wild turkeys can be found in parts of every county in Michigan's Lower Peninsula plus areas of the Upper Peninsula.

Managing wild turkeys in Michigan involves the complex interactions of turkey populations, their habitat and their relationship to people. Hunting plays an important role in wild turkey management. Since 1968, spring seasons have been the primary hunt times. In 1977, there were 5,000 square miles open for spring turkey hunting in the Mio, Baldwin and Allegan hunting units. By 1991, wild turkeys occupied about 22,000 square miles of spring hunting area in the Upper Peninsula and northern Lower Peninsula. Truly, the wild turkey population range had expanded dramatically.

Today, turkeys inhabit most counties, and there are more areas open to spring hunting than at any time in Michigan history. In 1977, a hunter's chances of drawing a license to hunt were about 25 percent. Today, all individuals are guaranteed an opportunity to buy a spring turkey hunting license.

In 1977, hunter success was below 10 percent. Today, hunters experience about 30-percent success regardless of whether they hunt the first hunt period or the last period. In 1977, hunters harvested 400 turkeys. Today, over 30,000 turkeys are taken by successful hunters. Michigan is ranked seventh in the nation for turkey harvest, trailing Missouri, Alabama, Pennsylvania, Wisconsin, New York and Mississippi. 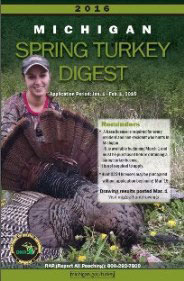 "If you are looking to hunt one of the limited-license turkey hunts, make sure to apply now," said DNR upland game bird specialist Al Stewart. "If youíre looking for broader statewide options in your hunt, you may want to wait and purchase Hunt 234." 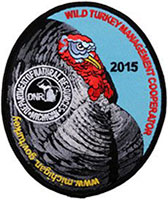 Adult hunters, collectors or other wild turkey enthusiasts may purchase the patch for $5, including postage and handling. Only the current-year patch is available for purchase. You do not have to harvest a turkey to purchase a patch. Please send a check or money order payable to the National Wild Turkey Federation to P.O. Box 8, Orleans, MI 48865. Youth hunters, up to 17 years of age, can receive a free patch by mailing a copy of their spring turkey hunting license to the address listed above.