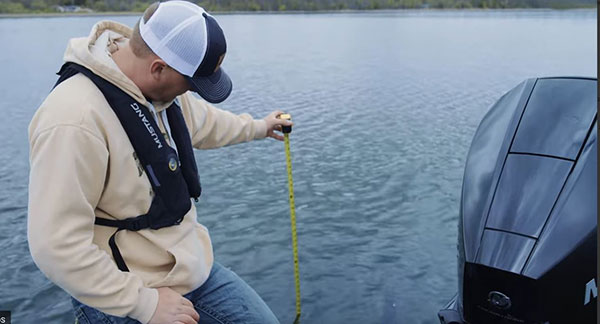 The vast array of marine electronics available these days is simply amazing. Quality, high-functioning products that can do just about anything can be easily found, making this an exciting time to be a boater.

However, that’s not to say that you can just plug them in and expect them to be set up for optimal performance on your boat right out of the box. You’ll want to read your owner’s manual first to make sure you understand all the basic functions of a given piece of equipment, so you can get the data you need, when you need it, without doing a bunch of trial and error in a moment when it might not be convenient to do so. Some items, like a depth finder, might also need to be calibrated.

But if you buy a new depth finder, why would it need to be calibrated? Wouldn’t it be adjusted correctly at the factory? The answer is no, actually, there’s no way anything that measures the depth of the water can be accurate without some adjustment. That’s not a big deal when the unit says you’re in 50 feet of water, but when it says you’re in 2.5 feet of water it could become a very big deal.

The reason for this is that the transducer – the transom-mounted part of the system that sends and receives sound waves off the bottom of the body of water – may be located at varying depths below the waterline, depending on the type of boat and installation method. If you don’t calibrate the unit to account for the distance the transducer sits below the waterline of the boat, you won’t get an accurate reading.

Fortunately, the team at Wired2fish has put together this easy-to-follow Mercury Quick Tip video that shows you just how to do it. All you need is a tape measure, notepad, writing utensil and perhaps the owner’s manual for your depth finder. Then just follow these simple steps: 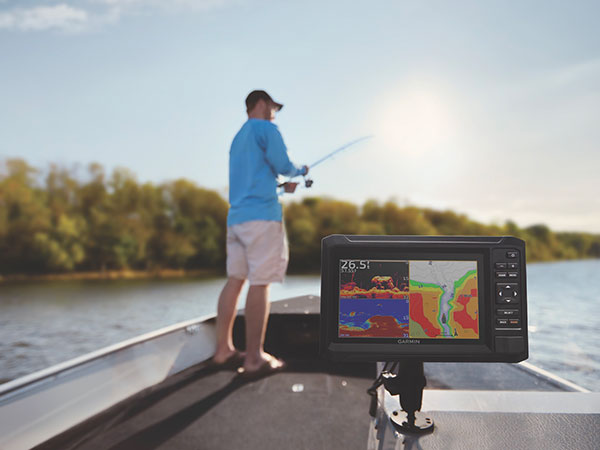 Offered in a new 5-inch as well as the popular 7-inch display, the ECHOMAP UHD2 plotters offer physical buttons for easy control and operation of functions every angler depends on for a successful outing, including marking key waypoints or quickly toggling between different chart views. Plus, built-in Wi-Fi® enables seamless sharing of sonar and user data between two ECHOMAP UHD2 units onboard.

Whether fishing with a friend or wanting the flexibility to add another chartplotter on board, built-in wireless networking allows anglers to stream sonar and share user data, such as waypoints and routes, between two ECHOMAP UHD2 units.

Of all the critical parts of a boat, few are more important – or more overlooked – than the humble bilge pump.

Not only does it get rid of the small quantities of water that get inside the hull from unexpected waves and the like, but it also serves as an essential warning device that your boat has a significant issue. After all, a constantly running bilge pump is often a boater’s first indication that the boat has a considerable leak, or that it’s been launched without installing the drain plug. Even so, most of us just take it for granted that it’s going to work as expected year in, year out.

The fact of the matter is that virtually everything has a finite lifespan, especially electrical components that are repeatedly exposed to water, but you can easily extend the life of your bilge pump with just a quick bit of annual maintenance. In this Mercury Quick Tip video, we’ll show you how to do it, and all you’ll need is a flathead screwdriver, wet/dry vacuum, white vinegar, scrub brush, small scissors and a tiny bit of grease. Here are the steps.

It’s also a good practice to test the operation of the pump while the boat is on the trailer. To do this, put the drain plug in and put a few gallons of water in the bilge via an access panel (taking care to not unnecessarily pour water directly on any under-deck electrical components). If equipped with an automatic float switch, the pump should activate on its own and pump the water overboard. In any case, you’ll want to test the manual switch as well. Once the water stops flowing, turn the switch off immediately as it’s not good for the pump to run dry. 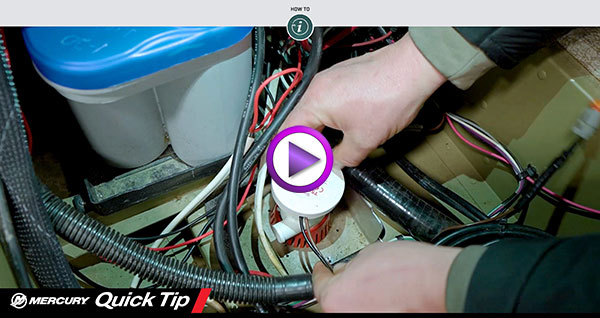 It’s almost impossible for the pump to be in the absolute lowest point of the vessel, so it’s normal for the bilge to have a small bit of water in it even after running the bilge pump. If either a concerning amount of water remains, the pump won't turn off or the flow from the pump is weaker that you think it should be, take your boat to your local Mercury authorized dealer to have it inspected before putting your boat back on the water.

Being prepared is a big part of boating safety. It starts with carrying the proper safety equipment and understanding how to use it.

One of the recommended items you should keep aboard is a first-aid kit. Although first-aid kits aren’t considered mandatory gear according to U.S. Coast Guard regulations, experienced boaters know that having a properly stocked kit aboard should be considered an absolute must. To get some insight into how a professional prepares for first aid aboard, we went to Capt. George Gozdz. The Mercury Pro Team member and host of “Unfathomed” has not only been a professional captain for more than 15 years, but prior to that was an emergency room nurse.

According to Gozdz, a basic first-aid kit belongs aboard every boat regardless of whether you run it inshore, offshore or anywhere else. A good start is a store-bought kit intended for marine use. Most kits meant for use aboard boats are packed in a container that is watertight or at least water-resistant, which helps keep essential supplies dry and clean.

Along with the basics, such as bandages, basic medication and cold compresses, the American Red Cross also recommends that all first-aid kits include:

Gozdz points out that while the basics will serve the needs of most boaters, he likes to take it next level when he’s traveling far from shore where medical attention may be delayed in the case of an emergency. That means packing even more bandages and, in his case, even some medical supplies that require advanced skills to administer. These are typically outside the scope of what most boaters would carry. However, he also specifies one item that anglers need to take note of: a tool capable of cutting through a fishing hook. Many of us have had to deal with accidental hookings at one time or another, and having dedicated hook cutters or a multitool capable of cutting metal fishing hooks will allow you to push the barb through, snip it off and back the hook out. In the accompanying video below, Gozdz also demonstrates an alternative method of fishing hook removal, which works well when hooks are caught in some parts of the body.

The fact of the matter is that boating is an amazingly safe activity – you’re statistically safer driving your boat than you are driving your car – but there’s surely not a mariner among us who doesn’t want to take every reasonable safety precaution before shoving off the dock. That includes packing a basic boat first-aid kit. Because while you might not have an emergency room nurse aboard every time you take out your boat, Capt. Gozdz’s advice is the next best thing.

Quick Tip: How to Install a Transducer Mounting Plate on Your Boat