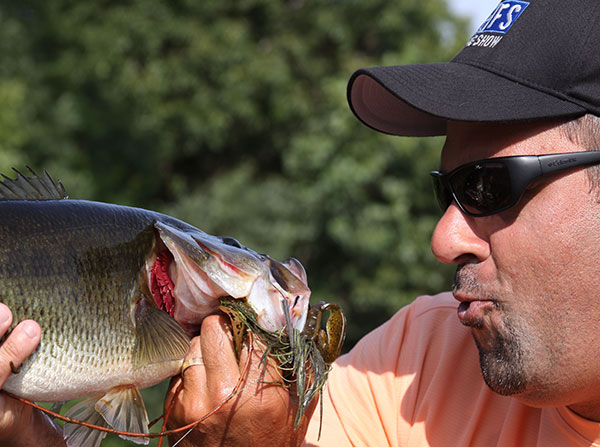 Anglers might be surprised to learn the weatherman can be one of the best tipsters for predicting the fishing action. Specifically, reports on the upcoming barometric pressure trend can help catch fish.

Experts theorize air pressure changes affect a fish’s swim bladder, which is used to help a fish maintain neutral buoyancy. Because it is filled with air, a fish’s bladder is sensitive to pressure changes that occur when moving between different depths, and most believe it is also affected by changing air pressure. Low pressure causes the swim/air bladder to expand, which many believe causes fish discomfort and causes them to retreat to a lower depth where the higher pressure relieves this bloating sensation. Conversely, higher pressure can cause certain species of fish to suspend.

Keep in mind, these are generalizations, as what’s considered “shallow” and “deep” varies greatly by body of water, and the activities of fish vary greatly based on season, species and many other factors.

Good musky fishing is where you find it. And during the months of May and June throughout the prime musky waters of the Canadian provinces, Minnesota, Wisconsin, Michigan, Illinois, Indiana, Kentucky, West Virginia and other states, musky experts Steve Heiting, Cody Hahner and Barb Carey agree that you’ll find it in some very specific places. They say water temperatures and available food are the two guiding factors. Crack the code by using the mapping, side-imaging sonar and temperature features of your electronics, employ the proper gear, and you’ll be gripping and grinning on a regular basis.

“Muskies spawn when water temps are 52 to 62, which typically occurs in May on the Wisconsin Northwoods waters I most often fish, but can extend into early June,” says Heiting, who most often begins his musky season fishing in or near spawning locations. “These are typically shallow, somewhat-protected bays away from the main lake, the best of which often have an incoming stream that provides warmer water,” Heiting advises. “Most fish that muskies will feed on also use these bays for spawning, so a spawned-out musky can often quickly find food.”

And once again, it went extremely well.

Biologists were able to meet their eggs goal from 136 muskies they collected in 2½ days. They shipped 356,000 eggs to the East Fork Fish Hatchery where they will be nurtured into stockable sizes.

After ice and snow cover melt on Michigan lakes early this spring, it may be more likely for people to discover dead fish or other aquatic animals. While such sights can be startling, the Department of Natural Resources reminds everyone that this is normal, since winter conditions can cause fish and other creatures such as turtles, frogs, toads and crayfish to die.

"Winterkill is the most common type of fish kill," said Gary Whelan, DNR Fisheries Division Research manager. "As the season changes, it can be particularly common in shallow lakes, ponds, streams and canals. These kills are localized and typically do not affect the overall health of the fish populations or fishing quality."

Shallow lakes with excess aquatic vegetation and soft bottoms are more prone to this occurrence, particularly when a deep snowpack reduces sunlight for the plants. Canals in urban areas also are quite susceptible due to the large amounts of nutrient runoff and pollution from roads and lawns and septic systems that flow into these areas, especially from large storm events.