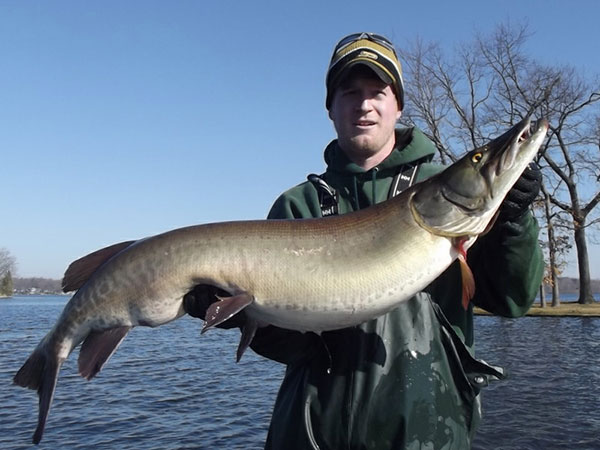 An apparent decline in muskies on Webster Lake will be the focus of a fisheries study this spring and summer.

The popular Kosciusko County lake has been heralded as one of the Midwests top muskie hotspots over the past decade, but catch numbers are declining and biologist Jed Pearson wants to know why.

Anglers say they arent seeing the younger muskies that they were 10 years ago, so its time to go take a look at it, he said.

Fishing guides  most of whom practice catch and release  say the number of muskies they are seeing is down from previous years, although fishing last year was a slight improvement over the year before.

A fisheries team began netting there this week and will continue doing so over the next few weeks. Captured muskies will be marked, documented and released. 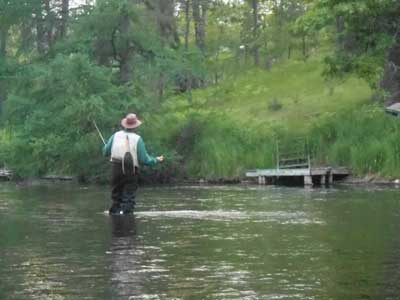 The Michigan DNR announced it is seeking input from anglers who fish for inland trout in Michigan. The DNR plans to use the information to assist in the development of a statewide plan for inland trout fisheries.

The Michigan Inland Trout Angler survey will gather information about these anglers, how they fish, what their thoughts and opinions are on inland trout management, and other items. Inland trout populations are defined as populations that spend their entire lives in inland lakes and streams, and generally do not migrate into the Great Lakes.

"The information we obtain from this survey will be critical in our effort to make sound management decisions," said Troy Zorn, research biologist with the DNR's Fisheries Division. "We hope anglers will take the time to complete it so our future management plan is reflective of their input."

The Michigan Inland Trout Angler survey is available online at www.surveymonkey.com. It should take anglers approximately 10 to 20 minutes to complete.

(Provided by All Creation Media) 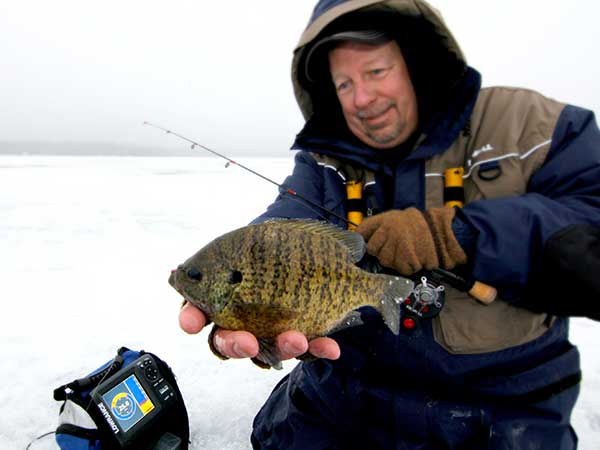 Ice anglers lean heavily on sonar to relay relevant news and information from the underwater world. Watch closely and your displays colorful flickers and flashes will tell you plenty about cover, structure, the mood of the fish and more.

While sonar has been a staple of the hardwater trade since the early days of the Ice Fishing Revolution, the recent arrival of CHIRP acoustic technology is being touted as an exciting twist to this time-honored tool. Short for compressed high-intensity radar pulse, it uses long-duration chirps to sweep a wide range of frequencies. This new way of sounding takes sensitivity, resolution and target separation to such new heights, it has actually changed the way I fish in the winter, reports veteran guide and decorated tournament ace Scott Glorvigen.

One of the biggest gains, he belives, is the ability to see fish like never before. Target separation is so good, you can pick out predators holding within a ball of baitfish, and even identify individual fish within a large school, he says. For example, when a big cloud of crappies or bluegills rolls in, CHIRP allows you to separate them all out, and even zero in on the largest fish in the group. Or if youre looking at a school of juvenile perch, the individual baitfish show up as tiny lines, while walleyes holding within or just below the school are represented by thicker returns. Traditional sonar cant come close to revealing that much detail. 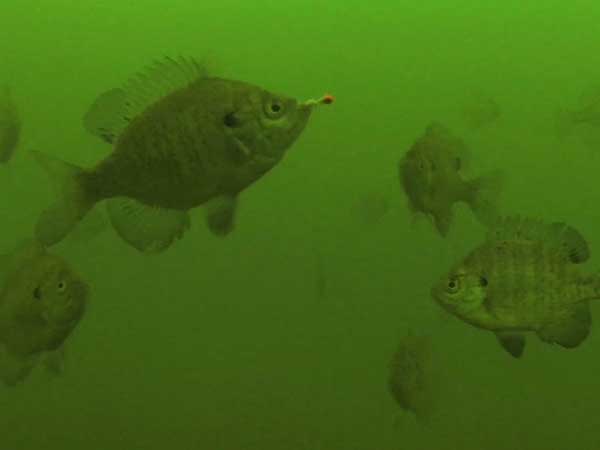 By revealing all fish in a group, CHIRP allows anglers to confidently and effectively present baits within the school. Most of the time, people fish above a school because they cant see their jig if they drop it into the fish, says Glorvigen. CHIRP lets me see the jig throughout the entire school, and position it slightly above the biggest fish, even when that fish is moving up or down within the group.

He notes that in most cases, attacks are best launched from above the school, to avoid spooking and scattering its members while plucking a schoolmate from their midst. But when small fish dominate the upper layer of the group, being able to effectively work deep into the crowd can produce big fish other anglers cant touch.

Lowrance territory manager and avid iceman Dan McGannon, who has put the technology through its paces on the companys new HDS Gen3 units, says CHIRP identifies fish tucked tight to bottom. While walleye fishing on Minnesotas Mille Lacs Lake, I was able to pick out fish tighter to bottom and separate between individual low-riding fish better than traditional broadband sonar, he says.

Another plus, Glorvigen adds, is that CHIRP makes it possible to predict the species of fish that appear on your display with surprising accuracy. Line width largely reflects fish size, but if you couple that with subtle details such as how a fish moves and the margins of its return, you can begin to see the difference between sunfish and crappies or perch, and tell walleyes from pike or bass, he explains.

In a similar vein, CHIRP reveals much about a fishs mood, as well as how it responds to various jig strokes. On a scrolling display, traditional sonar provides a great history of how quickly a fish moves through the water column and how it reacts to different jigging cadences, he says. CHIRP paints an even clearer picture of the fishs attitude and reactions to the subtlest tweaks in your presentation.

If you often fish near other anglers, youll also appreciate CHIRPs resistance to interference. You can fish with a buddy in the same portable and not be bothered by their sonar signals causing unexpected blips or vertical bars going across your screen, says Glorvigen.

The secret to CHIRP is its ability to scan the world beneath the ice with long-duration sonar pulses that sweep a wide range of frequencies, typically from around 50 to 83 kHz all the way up to 200 kHz.

These broad-spectrum, high-power beams yield much better detail than standard sonar, which relies on shorter bursts of single-frequency sound, Glorvigen explains. You dont have to tweak settings as often as conventional sonar, and you can even set the unit for low, medium or high signal ranges, to fit the conditions or your personal taste.

CHIRP technology is compatible with standard Lowrance transducers for the companys Elite CHIRP and HDS Gen3 series. On units equipped with Broadband Sounder, StructureScan HD and DownScan Imaging, you can even use multiple windows to view returns from the different systems simultaneously.

Coupled with user-friendly operation, these units make it easy to take advantage of everything CHIRP has to offer, and put this exciting new technology to work the first time you try it, Glorvigen adds. Whether you use it to put more fish on the ice or find more fish on open water, CHIRP gives you a distinct advantage.

On April 11, 2015, members of St. Joseph River Valley Fly Fishers, a Federation of Fly Fishers associate club; members of Kalamazoo Valley Chapter of Trout Unlimited and many others, will come together for the Ninth Annual Tie-a-thon to tie flies for Flyin' Heroes, of Muskegon, MI.

In nine years, fly tiers have donated over 65,000 flies to various good causes such as Flyin' Heroes who use fly fishing for education or therapy.

The premise of the Tie-a-thon is like an old fashion barn raising; several tiers tie as many flies as they can to donate to the cause. Joining forces again this year to tie flies are members of St. Joseph River Valley Fly Fishers; Kalamazoo Valley Chapter of Trout Unlimited; The Brotherhood of the Jungle Cock; Reel Women, Reel Men of Indianapolis; Grand Rapids Fly Tyers; Flygirls of Michigan; Anglers of the Au Sable; Little Elkhart Chapter of Trout Unlimited, Duneland Fly Fishers and many more individuals from all over the country.

A bunch of tiers come together to tie 100 flies each on a Saturday and at the end of the day, we try our very best to surpass our previous all-time high of 13,300 flies raised at one Tie-a-thon.

If you are interested, pick just one pattern to tie, buy a box of 100 hooks, the materials and get tying!

Flyin' Heroes is a program that utilizes the sport of fly fishing to promote therapeutic growth and rehabilitation of U.S. military veterans. The goal of Flyin' Heroes is to create memorable fly fishing experiences that unlock the healing power of the water and foster lasting relationships.

Participants of Flyin' Heroes will experience a unique guided float trip down the Pere Marquette River, Muskegon River and/or the White River located in West Michigan. Each participant will be instructed on the basic techniques of fly and/or light tackle for trout and other game species. For more information, check out www.flyinheroes.org.

To get you to participate on that Saturday, Chef Terry Wittorp will have a spectacular lunch for all the tiers - which is worth at least 200 flies, but we will give you a break. Everyone is welcome, but please reserve a spot beforehand. 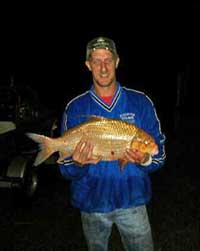 The Michigan DNR confirmed a new state record last month for quillback carpsucker. This is the fifth state-record fish caught in 2014.

The state record for quillback carpsucker was set by Benjamin Frey of Grand Rapids, Michigan, on Hardy Dam Pond in Newaygo County Aug. 29 at 1:45 a.m. Frey was bow fishing. The fish weighed 8.25 pounds and measured 22.62 inches.

The record was verified by Rich O'Neal, a DNR fisheries biologist in Muskegon.