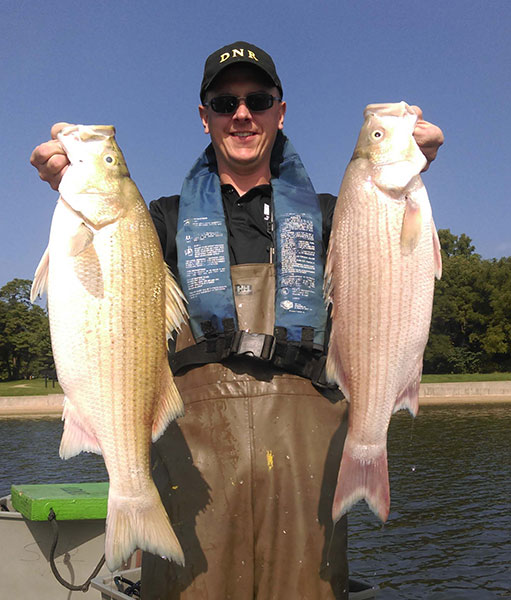 One of the most overlooked fish at Worster Lake at Potato Creek State Park is the hybrid striped bass (also known as a wiper), a fish that grows fast and fights hard.

“There are crazy good numbers,” he said. “The wipers are doing fantastic and growing fast.”

The majority of the fish Bacula captured in a netting project were 19 to 22 inches and weighed 3 ½ to 5 pounds each.

Despite good populations at Worster, the fish isn’t getting much pressure, probably because most people don’t know how to fish for them.

Admittedly, wipers are generally a pelagic fish, roaming the open water offshore when feeding on shad. But this is the time of year when they can be drawn closer to shore and into the headwaters of Potato Creek.

Hybrid striped bass are a hatchery-reared fish created when striped bass eggs are fertilized with white bass sperm. They grow large quickly like a striper but have some of the aggressiveness of a white bass. They were placed in Worster to reduce the burgeoning shad population that competes for food with traditional sportfish.

Hybrids generally don’t spawn but they will go through the ritual which occurs about the same time crappie spawn which is any day now.

That means you’re more likely to find them closer to the shore or areas where they are more accessible at Worster.

Areas to look for them include around the dam, on the swim beach and up-lake where the creek enters the reservoir.

These fish are eating machines, so the key is to find areas where shad or other minnows are prominent.

Moving lures that resemble baitfish are going to get you more bites, including jerkbaits, spinnerbaits and crankbaits.

Trolling is the best way to catch them after the spawning period. However, Worster Lake anglers are handicapped because outboards aren’t allowed. If you’ve got a good battery and electric motor, you may be able to move fast enough to pull bait through a wiper school and get bites.

Bill Carson, a buddy of mine with Humminbird Electronics and an avid striper fisherman, said he catches a lot of stripers and hybrids by trolling A-rigs tipped with grubs or swimbaits. An A-rig is a wire bait on which you can add multiple lures and looks like a school of baitfish moving through the water. Remember, though, Indiana only allows three lures with hooks but you can include some dummy baits without hooks.

The wipers also will rise to the surface and bust on shad, so keep a topwater handy as well.

First and last light are the best times to catch them.

If you have some success, let Michiana Outdoors News know. Anything you can share about catching Worster Wipes would help other anglers enjoy similar success.

Other northern Indiana lakes with hybrids include Cedar Lake in northwest Indiana, Lakes Shafer and Freeman (Carroll and White counties), and Nyona Lake in Fulton County.