Fisheries surveys and other companion surveys are critical to maintaining this fishery, which Michigan shares with New York, Ohio and Pennsylvania and the Canadian Province of Ontario.

Walleye populations remain near the all-time high, with trawling indicating that recruitment continues to be very strong. The age-0 walleye catch rate in the bottom trawl (14 fish caught per 10-minute trawl tow) was comparable to the past two years, coming in above the nine-year average of 11 fish per 10-minute trawl tow. Walleye reproduction during the past seven years has been strong, with multiple large year classes beginning in 2015. 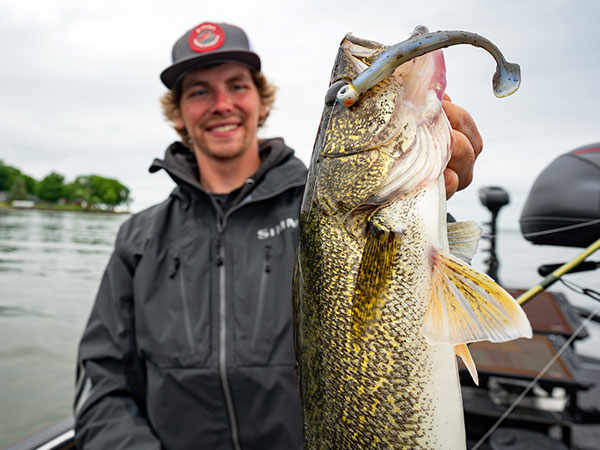 A self-confessed “bass angler for walleyes,” young Z-Man walleye pro Dylan Nussbaum has helped popularize an exciting, interactive approach to his favorite species. “For me, it’s all about solving the mysteries of finding and catching walleyes,” contends the Pennsylvania based tournament champ. “Every day is a different challenge, and that, to me, is a lot of fun.”

Nussbaum recently reflected on fishing strategy with forward-facing sonar (FFS). Recognized for his talents at actively casting artificial lures and soft plastics from the bow of his boat, Nussbaum offers compelling perspectives on what has become the biggest trend in freshwater fishing today . . . sonar “sight fishing.”

Z-Man: When did you first start using forward facing sonar (FFS) for your walleye fishing?

Dylan: I got my first unit—a Lowrance Active Target—about two years ago. If I’m up casting from the front deck of my boat, I’m using FFS one hundred percent of the time. The more I use it, the more I learn about fish and their real-world response to my lure. It’s pretty addictive. (laughs).

Z-Man: Tell us about your on-water learning curve with FFS.
Dylan: For me, it didn’t take long—maybe two or three outings—before I started figuring things out relative to fish species ID and seeing my lure on screen. These units are pretty intuitive and easy to use, especially once you see what a walleye looks like on screen and then confirm its size once the fish is in the boat. A walleye or a bass tends to paint a pretty solid image. But a carp or a muskie, for example, can look a little grainy on the screen. Walleyes generally (though not always) move within a foot or two of bottom. They typically move and react to your lure just a little slower than a bass, for example.

How to Tune a Crankbait 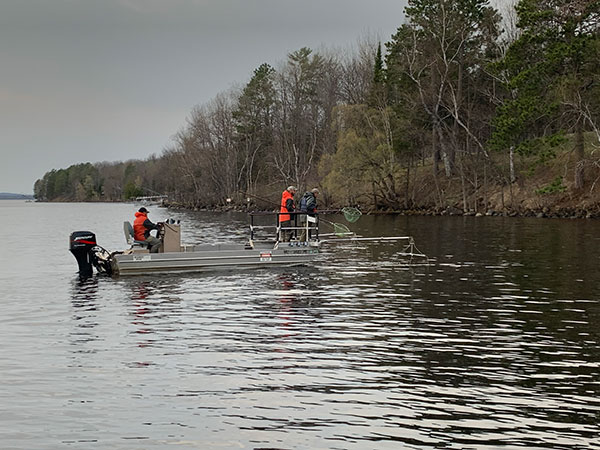 Beginning in late September through early October, anglers throughout the state are asked to be on the lookout for Michigan DNR personnel conducting walleye recruitment surveys – a tool that helps fisheries managers determine how many walleye either were produced naturally or survived stocking in 2022 (commonly referred to as a given year’s “young-of-year” fish).

Using electrofishing boats, crews will survey the shallow areas near the shoreline of lakes at night with the goal of capturing young-of-year walleye. On larger lakes, two or more electrofishing crews using separate boats may operate at the same time to cover more area.

“Conducting surveys on both stocked and unstocked lakes can affect decisions about future walleye research and stocking efforts and give valuable insight into the status of the younger walleye in the system," said Emily Martin, DNR Fisheries Division biologist.