The Michigan DNR announced that the daily possession limit for walleyes in Michigan's waters of Lake Erie will remain at six through April 30, 2016.

In 2011 Michigan adopted a process for setting creel limit regulations that allows the DNR to use real-time population data instead of using year-old survey results. This process parallels one adopted by Ohio in 2010.

"This regulations process is critical to helping us manage walleyes in Lake Erie in a timely manner," said DNR Lake Erie Basin Coordinator Jim Francis. "In order to do that, we have to set regulations in March instead of the previous autumn."

Michigan's daily possession limit for walleyes on Lake Erie is based on its share of the Total Allowable Catch (TAC) for the lake, which is determined by the Lake Erie Committee under the guidance of the Great Lakes Fishery Commission. The TAC generally is based on overall abundance of walleyes; the committee establishes quotas for each jurisdiction based on the percentage of habitat for adult walleyes in each jurisdiction's waters of the lake. The daily limit is based on a formula that projects how many walleyes anglers can keep but still remain within the quota.

Although Michigans season is closed, the coming of spring marks a surge in walleye fishing opportunities in river tailwaters below major dams throughout northern Indiana where the season is open.

River walleyes begin to migrate upstream by mid-March in search of spawning habitat. Where blocked by dams, they congregate in large numbers.

Avid walleye anglers have fished these areas for years, DNR fisheries biologist Neil Ledet said. We want to encourage other fishermen to give it try.

(Provided by All Creative Media) 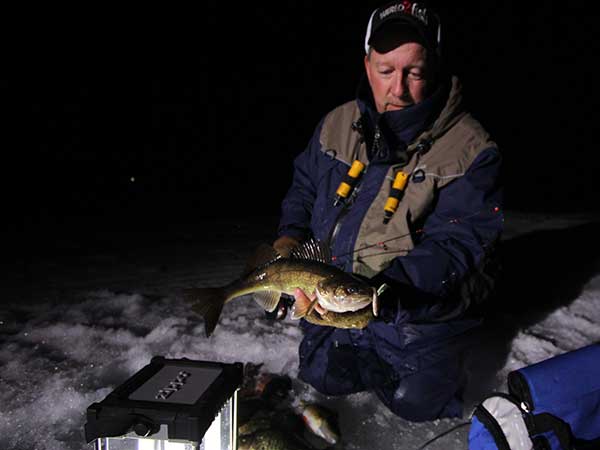 Long ice fishing trips can be tough to pull off and carving out a full day on the ice can at a challenge for a lot of people.

My favorites are early evening trips for walleyes or crappies, says longtime guide, decorated tournament champion and avowed night owl Scott Glorvigen. With a little planning, its easy to get away after work for a couple of hours and enjoy solid action, with a shot at trophy fish.

Gearing Up: Organization is critical.

Having everything you need ready and waiting makes it infinitely easier to hit the ice on short notice, Gorvigen says.

Would you like to catch more walleyes from the first idyllic days of spring right through the gales of November? Then think outside the box, and dont be afraid to test tactics pigeonholed for other applications.

Widely considered ice-fishing lures, swimming jigs are deadly on walleyes in a variety of situations, and despite their success remain largely off the radar of many otherwise savvy anglers.