Starting today, you can check your fall turkey application results by visiting www.mi.gov/turkey.

On August 21 at 10 a.m., those who applied for a fall hunting license and were not successful will be able to buy remaining turkey licenses online at www.mdnr-elicense.com or anywhere DNR licenses are sold.

And on August 28 at 10 a.m., all remaining licenses are available to anyone, including those who did not apply.

Starting today, you can check your fall turkey application results by visiting www.mi.gov/turkey.

On August 21 at 10 a.m., those who applied for a fall hunting license and were not successful will be able to buy remaining turkey licenses online at www.mdnr-elicense.com/Welcome/Default.aspx or anywhere DNR licenses are sold.

And on August 28 at 10 a.m., all remaining licenses are available to anyone, including those who did not apply.

The Indian DNR is asking the public to help it monitor summer production of wild turkeys during July and August and record sightings through a DNR web-based survey.

This online system allows for broader coverage across the state and greater participation from the public.

Anyone Can Hunt Wild Turkey During Michigan’s Spring Season 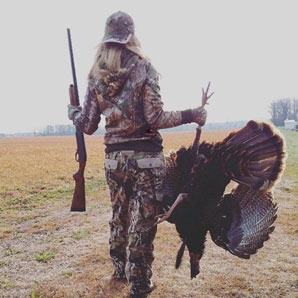 The intent of the spring turkey season is to provide opportunity to all hunters while maintaining high-quality turkey hunting, said Department of Natural Resources upland game bird biologist Al Stewart. Hunt 234 is a great way for anyone to get out hunting this spring, with a month of hunting and the ability to buy your license over the counter without an application.

Hunt 234 is a statewide hunting license valid for all open areas, except public lands in the southern Lower Peninsula (Hunt Unit ZZ). The Hunt 234 license can be purchased at any time throughout the May 1-May 31 season.

Michiana turkey hunters who do their homework shouldn’t have much trouble locating gobblers this month.

The odds of success might be better in southern Michigan, ranked the 8th best turkey hunting state in the nation. Southwest Michigan’s season opened April 17 and runs through May 31, depending upon the type of license you purchase. You will need a base license and a turkey license.

A special youth season kicks off Indiana’s season April 22-23 followed by the regular opener April 26. Indiana’s spring hunt runs through May 14. The bag limit is one bearded or male turkey. You will need a turkey hunting license and gamebird habitat stamp.

The spring season is built around the mating season when gobblers are looking for hens to breed.

Although the region has turkeys, hunting these wary birds isn’t as simple as walking into the woods. Scouting an area beforehand certainly helps; more importantly, hunters must learn to be patient, stealthy and have some calling skills to draw the gobblers into range.

In fact, the northern counties continue lead most other regions in the state.

Statistics show that the number of poults a hen raises tends to diminish in areas where the birds are more established.

The northern half of Indiana was one of the last areas to get turkeys restored by the Indiana DNR.

“The north is still riding a high because the birds are still relatively new up there,” he added. “But it will happen when the expansion starts leveling off and we’ll start seeing a decline in natural production.”

Backs said he’s even starting to get a few complaints about turkeys from landowners. Some hunters are even asking for an increase in bag limits, but the biologist said it’s too early to do that, especially with the anticipated decline in forthcoming years.

Most of Indiana’s turkey hunting is done on private land. For more information about Indiana turkey hunting, visit http://www.in.gov/dnr/fishwild/8695.htm.