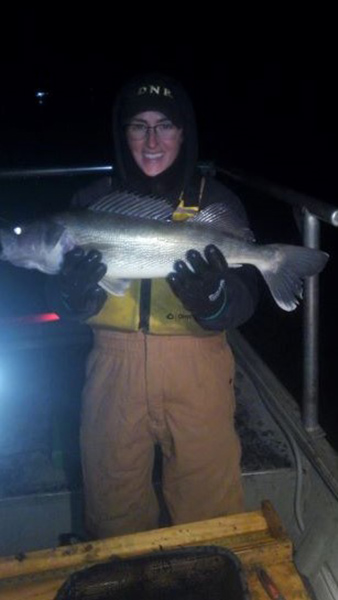 The 1,345-acre lake near Knox, Ind. is the state’s third largest natural lake yet the fishery is one of its most difficult to manage.

Except for the heavily stocked walleyes and fair crappie and bluegill populations, the lake doesn’t have very good fishing.

In fact, a quick bass survey last summer failed to turn up a bass, although biologists know there are some in there. All natural lakes have largemouth bass, but this one hasn’t been known as a good bass lake for decades.

So how did it get its name?

“I have no idea,” said District Fisheries Biologist Tom Bacula who is tasked with trying to provide the best fishery possible.

Good fish habitat has long been Bass Lake’s Achilles’ heel and the primary nemesis for biologists who have tried to improve it for years.

It’s a shallow (average depth is about 6 feet) and extremely turbid lake, primarily due to its heavy nutrients and lack of vegetation. That ongoing problem has led to an overabundance of phytoplankton and zooplankton - tiny, natural organisms found in every body of water.

It’s a longstanding problem and the water clarity has diminished even more the past couple of years.

“It tends to clear somewhat in the fall and winter, but during late spring and summer, visibility is about 9 to 12 inches,” Bacula said.

The heavy plankton population clouds the water so badly that sunlight can’t reach the bottom and promote plant growth. Aquatic plants not only provide good fish habitat but they also help filter the lake.

Don’t misunderstand; plankton can be a good thing. Those tiny organisms are the lifeblood of a fishery. They provide the primary food source for young sportfish and native minnows.

“One of the problems at Bass Lake is there is an imbalance in the fish population,” said Bacula. “There aren’t enough small fish feeding on the plankton and the amount of forage for adults is limited. We’re now trying to improve the prey species (on plankton) to take predation pressure off the minnow species in there.”

In other words, add more little mouths to feed on the plankton.

To accomplish that, the DNR did something it rarely does in a natural lake - increase the bluegill population with stocking efforts.

Last year, some 230,000 1- to 2-inch bluegills were added to the Lake with hope that they will gobble up tons of plankton, help clear the water and allow vegetation to sprout on the bottom. The vegetation provides habitat cover for young minnows and improves propagation of baitfish species.

The fact that the survey failed to turn up a bass last summer baffled Bacula.

“We shocked for four hours and came up with a goose egg,” said Bacula. “I don’t know that we’ve ever done that on any other natural lake.”

On the other hand, biologists found a large population of black and white crappie. Black crappies generally thrive best in natural lakes with clear water while whites tend to dominate in southern impoundments.

Bacula can’t explain why the abundance of blacks in such a turbid lake. The good news is that nearly 40 percent of all crappies were 10 inches or larger while a bigger percentage was 7 to 8 inches.

“Crappie fishing should be very good there in a couple of years based on the year classes we found,” he said.

The walleye population, although it wasn’t the focal point of the survey, threw him another curveball.

The Indiana DNR has stocked walleyes in Bass Lake nearly every year since 1980, but chose to postpone stocking last year because of the poor returns it has been getting from recent efforts.

But guess what? Bacula’s study turned up quite a few walleyes including several young-of-the-year walleyes.

How does a lake produce crappies, have such few bass, and miraculously produce what appears to be naturally reproduced walleyes?

Could there have been an illegal stocking? If so – and based on the numbers of new walleyes he believes are in the lake – such a stocking would have cost someone $20,000 or more.

The most reasonable yet bewildering conclusion is that those young walleyes reproduced naturally. And if that weren’t enough, the babies he found measured between 7 and 8 inches last fall. The last time the DNR did a fall survey of its stocked walleyes, the fish were 3 to 4 inches.

Bacula’s team is reviewing what it will do there over the next couple of years, but reassures anglers there are no plans to abandon walleye stockings at Bass Lake.

“We don’t have many walleye lakes and walleyes are providing a fishery for local anglers,” he said.

In the meantime, he and his staff will continue to seek ways to improve water clarity and trigger more habitat production.