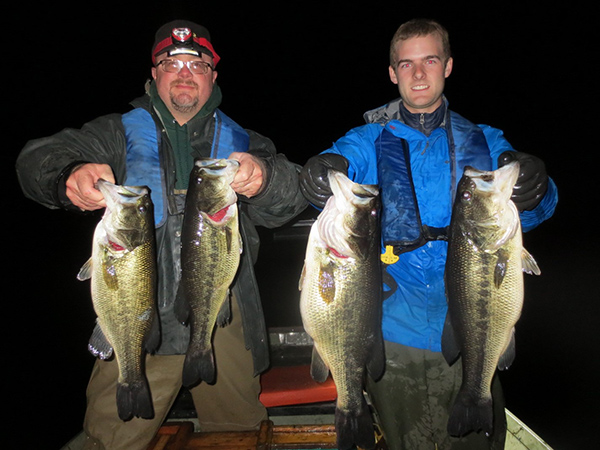 The pending results of an experimental bass size limit on Big Long Lake may lead to more Indiana lakes with a slot limit structure.

That’s the view of northern Indiana biologists who are conducting a study of what could be done on lakes that have an overabundance of undersize (less than 14 inches) bass.

A slot limit prohibits anglers from keeping bass between 12 and 15 inches and permits only two bass over 15 inches. The bag limit remains five, so they can fill out limits with bass under the slot limit or keep up to 5 “unders.” It is the same regulation in place on the St. Joseph River in Indiana.

As we mentioned here earlier this year, the DNR has noticed a trend of too many little bass and darn few quality bass in some lakes. It’s taking a closer look at those lakes to get a better handle on the numbers.

Bass over-population, coupled with slow growth, has been an emerging problem on some natural lakes ever since Indiana went to a statewide 14-inch size limit.

Big Long Lake, meanwhile, has been under an experimental 12- to 15-inch slot limit for five years. A DNR crew went back to check results this spring. The 365-acre lake lies in LaGrange County.

“I was shocked to see the difference,” said District Fisheries Biologist Larry Koza.

When a similar bass population study was conducted in 2010 before the slot limit went into place, biologists captured 2,000 bass in four hours and only one of those measured 14 inches or bigger.

“There was a load of 11 and 12 inches and the only keeper barely measured 14 inches,” Koza recalled.

This year – following five years of the slot limit - they captured 400 bass and 77 were over 14 inches.

“We had a couple in the 20-inch range, three that were 19 inches and five that were 18 inches,” Koza said. “The largest was around 7 pounds. That’s a pretty amazing difference.”

“It may something that takes a while to figure out, but we’re gathering data in case we decide to go through the (Natural Resources Commission) rule making process to change size limits on more lakes,” explained researcher Linn. “But first, we have to see what the data tells us.”

Biologists point out that such changes are considered only on lakes with high small fish/low big fish populations. The problem most frequently occurs on lakes less than 100 acres.

The DNR also will keep a watchful eye on bluegill populations on those lakes. Trends show that lakes with high bass concentrations also have a good bluegill size structure because bass predation help keep the little ones thinned out.

Koza would like to go back to Big Long to check its bluegill population, but noted that he observed a good population of bluegill and redear of all sizes while shocking up bass.

“I would think that having bigger bass feeding on the bluegill would compensate for not having a lot of smaller bass,” he said.