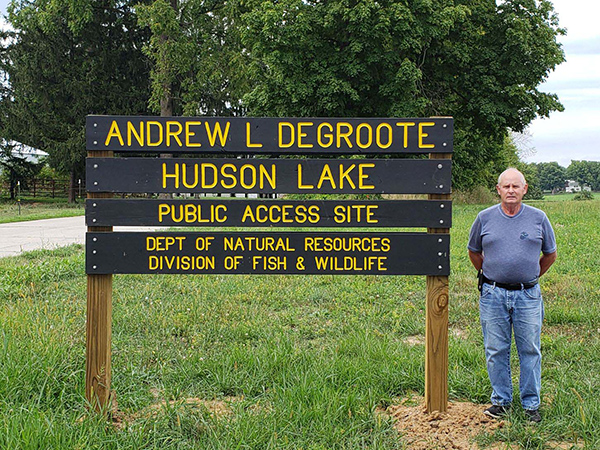 If the state had more folks like this generous man, we’d have a lot more public access on northern Indiana lakes.

You see, the 75-year old Eagle Global Logistics retiree probably could have made some money on the one acre land parcel he gifted to the Indiana DNR for the new Hudson Lake public access.

But he didn’t. He chose to donate the land that recently became the Andrew L. DeGroote public access site.

“God gave us a reason to do it by blessing my family use of the lake over the years and this was our opportunity to give something back,” said the modest Hudson Lake, Ind. man.

In addition, it gave him the opportunity to honor his brother Andrew who died in a hunting accident in 1945, just two years after Jack was born.

Andrew was hunting alone about a mile from home, when, according stories told to Jack, he stuck his gun through a fence and the wire caught the hammer. It discharged into his shoulder.

“I’m told he walked in the house and said, ‘dad, I messed up’,” DeGroote recalled. “My dad took a butcher knife and cut away the clothing. At that time, there were no phones and only two cars in the neighborhood. Dad borrowed a neighbor’s car to get him to the hospital.”

Andrew ultimately died of his injuries in Holy Family Hospital in LaPorte.

Although Jack was too young at the time to have any memory of his brother, he has always wanted to honor him in some way.

The donation made that possible.

“My family lived off the land and the lake,” he said. “Our family hunted the land around it and we all, including my mom and grandmother, fished the lake. This area provided a lot of meals for us while growing up.”

DeGroote was born and raised in a house at the south end of Hudson Lake in the Lake Park neighborhood.

“I remember my dad telling me that when he first moved there, he could shoot a rabbit off his back porch,” he said.

He and his late wife Sharon bought property on the west end near the backwater area, where the new access is located.

“We had about 33 acres and raised beef cattle and hay for several years,” he recalled.

The land gifted to the Indiana DNR for the access site borders a state-owned wetland. DeGroote initially approached the DNR about donating it naming the wetland after his brother.

But that’s when since-retired Lake Michigan Biologist Brian Breidert, who lived in the area, approached DeGroote if he would consider offering his donation as a public boat launch.

“I never thought about that but liked the idea,” DeGroote said. “If I could provide more people the opportunity to enjoy the lake like my family did, that would be a great thing.”

It’s because of people like DeGroote that Indiana has public access on a number of lakes. The state government won’t spend a dime to purchase land for lake access. Money that maintains existing sites comes from some fishing and hunting licenses coupled with federal excise taxes sportsmen pay when buying their equipment.

Several readers have sent notes voicing appreciation for the access the DNR recently built at Hudson Lake. However, several have complained there is no path through the shallow lily pads to the main lake.

The access lies in the backwaters off the main lake.

The DNR did cut a swath through the vegetation that runs near the shoreline before making a 90-degree turn toward the lake, but it may be difficult to distinguish or for larger boats to negotiate due to the shallow water.

A channel dearly needs dredged but that will cost money that the DNR probably won’t spend unless it hears enough requests/complaints from you. Send an email to the Division of Fish and Wildlife at dfw@dnr.IN.gov.