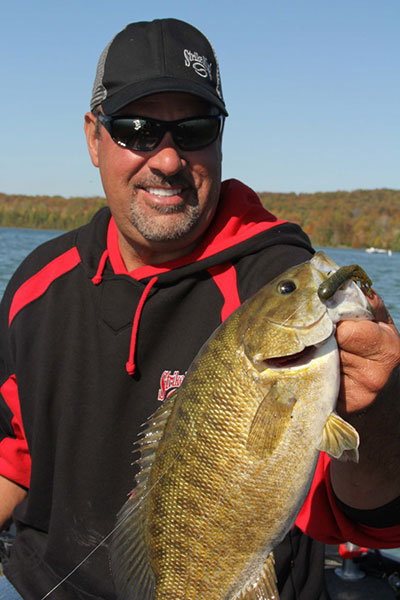 There’s just something special about fall fishing, regardless of which species you prefer to pursue.

For me, it’s smallmouth bass.

Smallmouth aren’t the dominant species in Michiana, although the St. Joseph River has a good population and a few lakes offer just enough to get you excited about the possibilities.

Those nearby lakes would include Maxinkuckee and Wawasee in Indiana and Diamond, Eagle, Klinger and Magician in southern Michigan.

But if you want to fish lakes where smallmouth bass dominate and grow big, you must go north.

That’s why you see so many Michiana anglers make an annual fall pilgrimage to the Traverse City area and other lakes to the north.

There are at least a half dozen good smallmouth lakes near Traverse City that consistently produce three pounds-and-up smallmouth and where you stand a chance to catch a giant.

You can catch them on a variety of techniques. Spinnerbaits, jerkbaits and finesse soft plastics tend to work best, but topwaters can be good at times, too. When they are biting, you can fish just about anything.

That doesn’t mean it’s always easy fishing up north. The wind blows up there the majority of the time and sometimes those winds can make fishing and boating difficult, if not uncomfortable.

The weather is always a crap shoot. Because of the close proximity to the Great Lakes, wind, rain and even snow can change by the hour.

Timing is everything in the fall, and not solely because of the weather.

There is a window when the bass get shallow and are putting on the feed. Hit it right and you can have the trip of a lifetime.

Get there too early and fishing can be tough.

That’s been my luck the past few years.

For example, I participated in a media event hosted by Strike King Lures in mid-October. They brought in their fishing pros, including Michigan pros Kevin VanDam, Jonathon VanDam, Mark Zona and a few others. The plan was to spend some time fishing, catch some big ones for photos, and do interviews for future magazine stories.

But like I said earlier, timing is everything. While the weather was mild and the wind gentle, the fish were in a funk.

Several were caught, but very few were four pounds or bigger. The fish were scattered, too; you could find them in as little as three feet of water or as deep as 40.

“They were in that transition from summer to fall patterns and for some reason, the big ones weren’t overly active,” said Zona. “That makes them harder to pinpoint."

In other words, we were a week or two too early.