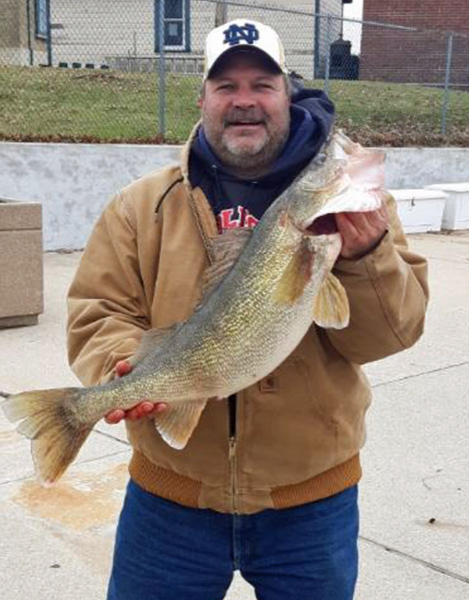 “If only that fish had eaten one more shad…” said the Michigan City angler.

Ryba caught the 13.96-pound monster walleye from Trail Creek harbor shoreline in Michigan City a week ago Friday. Had it eaten one more of the large shad schooling where Trail Creek empties into Lake Michigan, he’d have broken the record that has stood for 45 years.

All is not lost, however. After the official weighing and photos, the fish was released back into the creek mouth.

“I want another shot at her – when she’s bigger,” said Ryba.

The catch was no fluke. Ryba was targeting walleyes that have appeared in the harbor area the past few years. Last year’s Indiana Fish of the Year was a walleye caught in the harbor on Dec. 21. It weighed 11.88 pounds.

“I know the big walleyes move in there this time of year and I’ve been fishing for them for 15 years,” said the retired carpenter. “I finally got one.”

When he heard that Lake Michigan DNR staffers had netted a 12½ pounder during a lake trout survey at the Michigan City breakwall, he launched his boat and went out there to jig and troll for walleyes.

“Never got a bite,” Ryba said. “So I figured my best chance was fish from shore. It seems like the walleyes move into the channel when the water gets dirty.”

So, two days later, he headed to north bank of the channel across from the DNR station. He was casting a shad colored No. 9 Berkley Flicker Shad about 10 feet off the bank when the fish hit.

“I figured it was either a lake trout or a walleye, but realized it must have been a walleye because it didn’t pull like a laker,” he said. “When I saw her roll near the surface and saw that big belly, I knew I had a big one.”

It took him about 10 minutes to land the 31¾-inch fish on 8-pound Trilene monofilament and spinning gear.

A friend’s hand-held scales showed the fish bouncing around the 14-pound mark, so Ryba called Lake Michigan Biologist Ben Dickinson and asked him to bring official scales to check the fish’s weight.

Once they realized the fish just missed the state record, Ryba eased the big walleye back into the creek.

A combination of the abundance of shad, gobies and rocky structure seems to attract walleyes at the Trail Creek mouth each fall. For the past several years, the DNR captures a few big walleye in their nets set for a lake trout survey.

“We don’t see an abundance of shad around Michigan City, but when we do, it’s at the breakwall out in front of the creek or in the harbor area,” said Dickinson. “Lake trout are drawn to the breakwall this time of year and gobies and shad are high on the list of availability out there.”

His crew studied the stomach contents of a few of the lakers captured and nearly all were full of shad.

This year, four walleyes were captured in nets and released. The smallest was around 24 inches.

“I wouldn’t say there is a big population of walleyes around the harbor area, but it’s a lot like muskie fishing,” he added. “The anglers who target them and put in a lot of time have a chance to catch a trophy walleye. But you can’t go out there and expect to catch one every time you fish.”