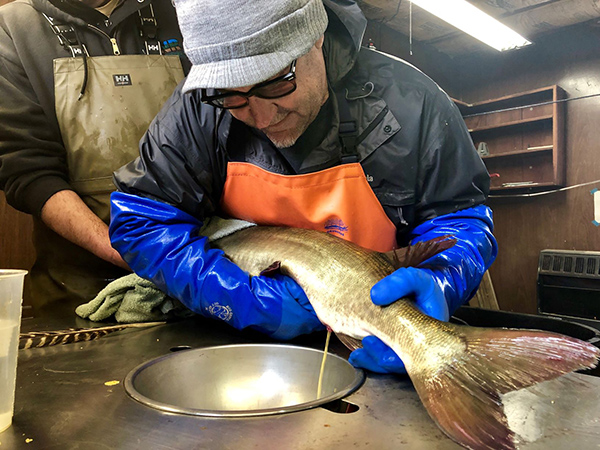 If these were normal times, you’d see DNR workers manning nets this week for adult muskies at Lake Webster.

But the times they are a changin’.

There will be no muskie collection or egg taking this year due to stay-at-home orders and the Covid-19 crisis.

In addition, Indiana will not be capturing adult walleyes at Brookville Reservoir to collect eggs for near-future stockings.

“We brainstormed ways to work around it but it just isn’t something we could do without compromising the staff,” he said. “We made a tough call but have to live with it.”

The bright side, he added, is Indiana already has fish in the system from last year’s brood stock, all of which will go into Webster. Barbee Chain, Tippecanoe, Skinner and Bruce won’t get fall fingerlings later this year. All of those lakes, including Webster, won’t get a spring stocking next year.

“I’m certainly not minimizing the importance of these stockings, but muskies live a long time and previous stockings will contribute to the fish population in the interim,” Price added. “In addition, there’s a great deal of angler catch-and-release practices with muskies which enhances low mortality. The fishery is somewhat resilient since these fish live so long.”

Indiana’s northern Indiana muskie fishery is one of the country’s most successful programs although it took a hit a few years ago. A change in hatchery practices and stocking methods, coupled by improved habitat at Webster, appear to be bringing it back. Several young fish were caught last year.

While the muskie collection is typically handled in a week, walleye collection takes about four weeks and requires staffers from around the state to work in five-day shifts at Brookville Reservoir.

“We would have so many people going in and out and working in close quarters that there was enough risk that we were worried about it,” Price said.

The DNR still plans to stock some northern Indiana lakes with walleyes it purchases from a Wisconsin hatchery. Those fish go in during the fall. Although the numbers are limited, those fish are larger and seem to do quite well.

Northern Indiana lakes that won’t get stocked with Indiana small walleyes this year include Pike Lake in Kosciusko County, Lake of the Woods in Marshall County, Bass Lake in Starke County and Kokomo Reservoir in Howard County.

Price said walleye populations aren’t as resilient as muskie so there is a possibility that anglers will see an impact on some lakes.

While missing a stocking year certainly isn’t desired, this will give biologists a chance to visit those lakes in the fall and check for natural reproduction. If they find tiny, young fish in lakes that weren’t stocked this year, it will indicate some natural spawning is occurring.

“We know there is some limited natural reproduction in some waters but the prevailing thought is there isn’t enough to sustain it,” Price said. “We will be able to look at some of those places where we suspect it’s a possibility.”

The biologist said his crew is eager to jump back into the field as soon as the state lifts restrictions.

“My guys prefer to be in the field and not confined to working at home,” he said. “When the state order is lifted we’ll be back at it.”