Swimbaits are Deadly for Michiana Walleyes 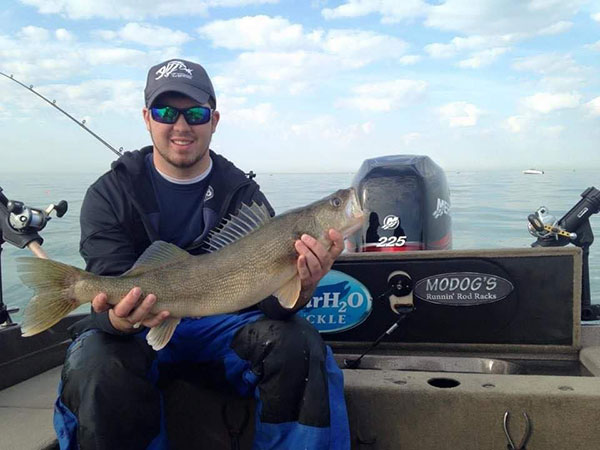 In fact, says walleye angler Steven Szymczak, it’s one of the most effective – yet overlooked - techniques for catching walleyes in Michiana.

“It’s definitely the most underutilized technique,” said Szymczak, who works at Clear H2o Tackle in Edwardsburg. “Everyone thinks of it as a bass lure, but it’s very natural and really deadly on walleyes.”

Swimbaiting is effective on the St. Joseph River and nearly all of Michiana’s lakes that contain walleye, he added.

“It works on the river on the Maggies Landing stretch (above the Twin Branch Dam) and lakes like Lake of the Woods in Bremen, Sylvan and Big Turkey in Indiana,” said Szymczak. “I was bass fishing Maggies a few days ago and caught a lot of walleyes using the swimbait the same way I fish it for bass.”

He likes using either the Keitech Fat Swing (3.3) or the Reaction Innovation Little Dipper (3.0) for walleyes. His favorite colors are black (for dark water) or the more natural ayu color.

When fishing water less than 15 feet, he rigs it on a 1/8-ounce D’s Swimbait Jighead; he’ll use ¼ ounce when fishing deeper. The D’s version, he said, has a light wire hook for good penetration, plus it’s a bit longer and will catch more of the short strikers.

“This is a very natural finesse technique that you can do with spinning or baitcast gear,” he said. “I like baitcast because it gives me more power to drive the hook home, especially when the fish hit and knock the slack out of the line.”

He recommends a 7-1 medium action rod with a fast tip. Baitcast reels should have gear ratios ranging from 6.3 to 7.3:1.

He slow winds the bait above bottom, occasionally letting it fall. He also will twitch the rod tip or wind in short bursts to make fish react.

In the river, he’s keying on seawalls, weed edges or current seams.

“On lakes, the fish are shallow and around weed edges,” he said. “Walleyes are spawning around the weed edges while the post-spawn fish are hanging shallow. Most of the bait is shallow so that’s where you find them feeding right now.”