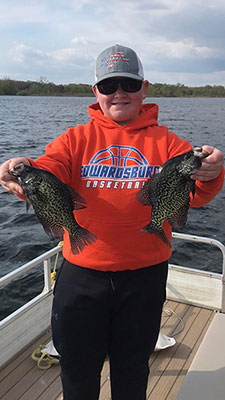 Panfishermen can expect a banner holiday weekend assuming the weather is stable.

If you're fishing Michigan this weekend, you won’t need a license as the state will celebrate a free fishing weekend Saturday and Sunday for both residents and non-residents.

Bluegills and crappies are biting just about everywhere, with both species spawning shallow on some lakes. Things could slow down a bit with Friday’s cold frot but fishing should still remain pretty good over the holiday.

Bluegills began moving onto beds on the shallow, darker lakes last week and should be in full force on most lakes by the weekend since we will be under a full moon beginning today.

“It doesn’t matter where you go, the fishing is good everywhere down here,” said Bonnie Kelley of Kelley’s Bait in Lakeville, Ind.

“Bluegills have been really biting good,” said Brian Hensley of Clear H2o Tackle in Edwardsburg. “They’re just starting in the deeper, clearer lakes but with the full moon it should be good just about anywhere.”

Given the full moon period, you’ll find a lot of bass on beds as well. Bedding activity began on some lakes more than a week ago.

“Apparently, a virus hit crickets and wax worms so it’s made them harder to get and caused the wax worms to be smaller than normal,” she said.

Minnows will catch the crappies, but tiny soft plastic swimbaits, grubs and tubes will get them as well, Hensley said.

Jim Housman of the Tackle Box in North Webster, Ind. said panfishing has been very good on lakes in his area with a lot of spawning activity.

Muskie fishing has been decent; he heard of a 55-incher caught on Tippecanoe Lake last week.

“The muskies are running a little behind but some are definitely being caught,” he added.

Some yellow perch were being caught from Lake Michigan around Michigan City and Burns Ditch as the fish are beginning to spawn.

Trout and salmon action has been somewhat sporadic with the best fishing in 120 to 200 feet of water.

“There are some steelhead, kings and lakers around closer but the most consistent fishing has been out deeper,” said Darrin Schaap of Clear H2o.