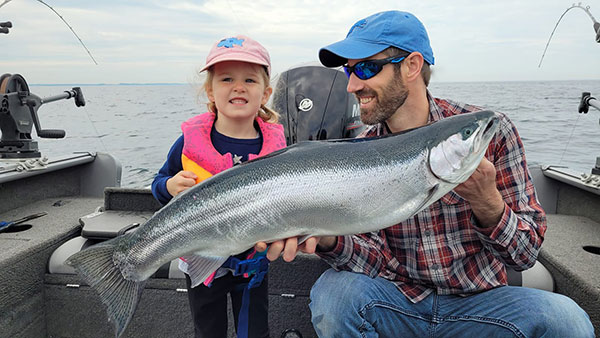 Cooler water temperatures and rainfall has drawn Skamania steelhead into some Michiana streams and rivers.

Indiana Lake Michigan Biologist Ben Dickinson said his crews have been gathering several steelhead at the Trail Creek Weir in Michigan City and hope to be done soon.

The adult fish being collected will be stripped of eggs and milt to produce future steelhead stockings.

Dickinson said fish managers have all the males they need and are now sorting through fish at the weir to get more females. All fish not taken are passed back over the weir and will become available to upstream anglers.

The run has been slower on the upper St. Joseph River due to higher water temperatures. Trail Creek waters run colder than the St. Joe.

“I heard a bunch of fish went through Berrien Springs but we never saw many in South Bend,” he said. “They’re probably holed up around the cooler water coming in from other tributaries.”

As of Monday, the fishing on Trail Creek has been pretty good and the water conditions are favorable. Fishing has been good on the lake near shore when boaters can get out.

There was some good news for perch anglers, too. Dickinson was concerned north winds would ruin the thermocline, but it hasn’t.

“I would advise perch anglers to get out there when they can and start looking,” he said.