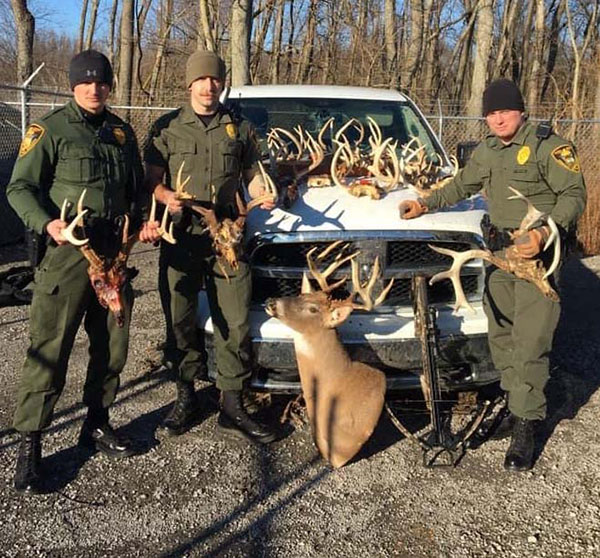 No one likes a poacher – certainly not conscientious sportsmen and definitely not conservation officers.

That’s why northern Indiana Conservation Officer Dustin Whitehead dogged a case for three years that resulted in arrest of two men, one of whom did prison time for multiple charges, including illegal taking and possession of 16 deer, illegal possession of a stolen firearm and resisting arrest.

But Whitehead didn’t stumble upon this case. He got it from a tipster who called Indiana’s Turn in a Poacher (TIP) hotline. The informant – who received a $2,000 reward from the TIP program - reported information over the phone that one of the suspects was spotlighting deer at night.

“I’ve been on the force for 11 years and gotten quite a few convictions from cases that come through our TIP program,” Whitehead said. “It’s rare that we go down a road at night and see unlawful taking of deer. The odds aren’t in our favor, and that’s why this program is so important.”

This case was unique in that it required extra patience and good police work that ultimately led to conviction of the repeat offender.

It began when the tipster provided specific details of a man going out at night in Kosciusko County and shooting deer all season long. He even provided a video of the suspect unloading deer from the bed of his truck at 3 a.m.

However, Whitehead couldn’t use the video to apply for a search warrant because it would expose the informant who wished to remain anonymous.

He had to go it alone, keeping surveillance on the man at his property. One night he sat in a field and watched the man return home at 3 a.m. and unload two deer from his truck bed.

“I couldn’t act then because I would have had to expose the tipster if I were asked in court why I was there at 3 a.m.,” he said. “So I had to build my own case.”

As luck would have it, the case hit a snag when the suspect separated from his wife and moved to a different area and was gone for a year.

“I kept thinking about him and began following him on social media,” recalled Whitehead. “I learned he was back with his wife and was posting photos of deer hanging and being processed on his property and records showed he didn’t a have hunting license.”

When Whitehead spotted the suspect’s truck parked on public property, he examined the bed and saw pools of blood running down the tailgate. That gave him evidence for probable cause and got permission to sneak a GPS Tracker on the man’s truck.

“We documented his movements of where he went, when he traveled and where he stopped over the next few days,” said Whitehead.

Again, officers who monitored the house saw the man leave around midnight with a long gun in hand. The GPS Tracker showed he stopped at a residence in Noble County around 1 a.m. and returned there three hours later. Officers surmised he picked up another poacher.

A week later, the suspect repeated those same movements. Officers watched him get home at 4:49 a.m. with large deer antlers in the back of his truck.
“The next day he checked in the deer online, stating he took the buck in mid-morning, but we knew that he never left the house that morning,” Whitehead said.

The GPS enabled the officers to retrace the suspect’s tracks and found blood and deer hair tossed in mud 200 yards off the road.

A few days later, GPS showed he left his house late morning and stopped 1½ miles from his house for less than two minutes. Officers followed his GPS trail and found two deer carcasses, and would later match the blood samples to deer he had taken illegally.

“We had enough evidence to get a good prosecution on him,” he said. “We drove by the other suspect’s house and saw deer hanging next to his house; he didn’t have a license nor had he checked in the deer.”

Ironically, when officers sought search warrants at the prosecutor’s office, a 911 call came in from a woman stating that her husband had left the house and was going to his storage unit to get his gun to kill her and himself.

It was their primary suspect.

State Police were summoned and given the man’s GPS location. When they attempted to stop him, he fled through a muddy field and crashed his truck.

Search warrants at his house and storage facility revealed 16 sets of antlers, all deer he admitted killing. He also said he had been shooting deer at night ever since he had been released from prison, where he had been jailed for other charges in 2010.

The Noble County man, who was the cousin of the primary suspect, confessed as well. A search of his place revealed two sets of antlers and guns that had been stolen from Albertson’s Sportshop in Warsaw.

Whitehead said the case exemplifies the importance of Hoosiers reporting violations through the TIP program.

“You’re not a ‘snitch’ if you turn in a poacher,” insisted Whitehead. “That person isn’t a hunter and you don’t want him influencing your sport. The TIP program protects your identity if you wish, and will reward you accordingly.”