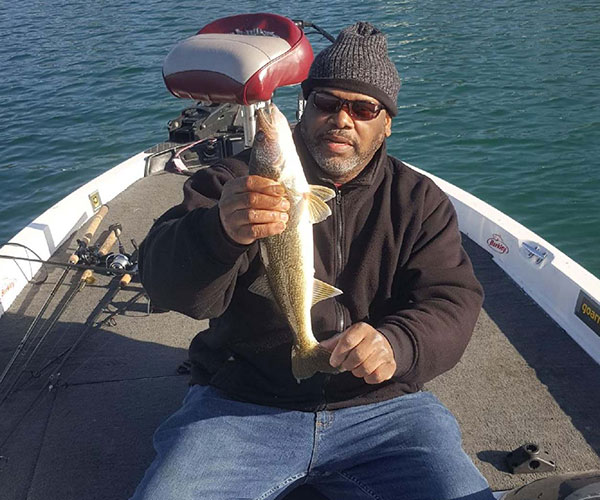 Anyone who fishes Diamond Lake or Michiana bass tournaments knows Robert Evans is a bass guy.

But did you know he’s also an avid walleye angler and has success on some of Michiana’s most popular bass lakes?

Evans says he’s learned how to catch walleyes on Diamond and Magician lakes and has no problem telling how he does it.

Evans admits fishing for walleyes can be frustrating on those lakes that don’t appear to have huge walleye populations.

But they can be caught and even on bass presentations.

“I know there are a lot more walleyes in Diamond and Magician than most people realize,” he says. “Most of the fish I catch are keeper-size and the biggest weighed about 7 ½ pounds.”

A Michigan DNR spring survey last year backs that up. Biologists say they captured a high number of walleyes. Michigan stocks fingerlings in the lake every other year in addition to some private stockings of larger fingerlings conducted by local groups.

Evans says the fish are usually scattered so you have to work for them, but he has had days when he limited out. Of course, if the season isn’t open, he releases them.

The best time is not long after the ice leaves the lakes and when the water temperature is in the low 50s. That’s when he gets onto the lakes early in the morning and fishes blade baits on the larger, sandy flats.

“It’s surprising how shallow those fish will get,” he says. “They are a lot like bass that time of year. I’ve been up on those flats looking around and will see them dart off and could tell they were walleye by the way they were built and the white spot on the tail.”

He now uses side imaging to scan the flats.

“I’ll put my boat close to the break in about 6 to 8 feet of water and look for fish in that 3 to 4 feet depth,” he describes.

Sometimes he just works that edge, casting ½-ounce Silver Buddies onto the flat and works them with a short, lift-and-fall presentation.

“I raise it just enough to feel it ‘blurp’ then let it fall,” he says. “If they are active, I will fish a suspending perch-colored jerkbait. I’ll snap it a couple of times then let it sit for about 5 seconds.”

He’ll get back after them during the late fall when the water drops into the low 60s, but changes tactics. He will troll livebait spinner rigs with nightcrawlers.

He trolls at slow speeds with his electric motor, allowing the bait to hover just off the bottom.

“We weight the spinner rigs with large split shots and catch the fish out to 15 feet,” says Evans. “Any blade perch colored works best. We also catch a lot of other species as well.”