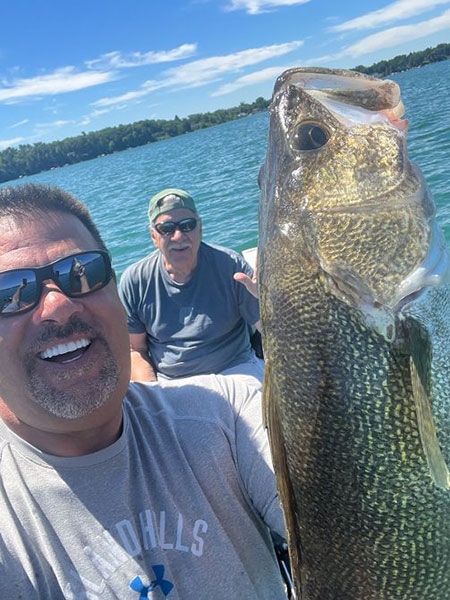 Will we see a new Zona fishing show next year… like maybe, “Zona’s Awesome Walleye Show?”

Not likely, but our celebrity Michiana resident hooked him a good one Thursday while fishing with his dad, Big Al, on Klinger Lake.

Zona, who grew up on Klinger and lives near White Pigeon, Mich., is the host of “Zona’s Awesome Fishing Show” and co-host of “Bassmaster Live.”

He estimates the walleye was “a heavy 9 pounder” that he caught while drop-shotting a Baby Z-too in 27 feet of water.

“We were catching bass and pike from that spot when this thing bit,” Zona recalled. “At first I thought it was a big pike…and then I saw it.”

Luckily, he had a net in the boat – something he rarely carries – and his dad scooped up the giant walleye. After a few photos, the fish was returned to Klinger.

“And we went right back to catching bass,” Zona said with a laugh.

Was it his biggest walleye ever from Klinger?

“I caught one about that size about 25 years ago and I’ve seen some 12s while ice fishing,” he said. “You don’t catch many walleyes in Klinger, but when you do, they’re generally 6 pounds or bigger.”