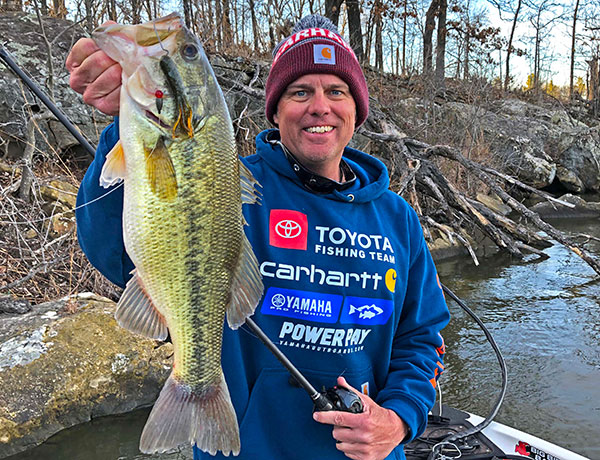 The Garland brothers introduced the first tube to bass fishing in 1982, and for about the next 15 years it was used mostly as a finesse lure tied to spinning tackle in clear water, and around spawning beds.

Then, Arkansas’ Doug Garrett kinda let the cat out of the bag about the scary good effectiveness of pitching tubes to shallow habitat following his 1997 MegaBucks win with a 3.5” smoke red tube on stingy White Rock Lake in Dallas.

Brauer actually found his Classic winning fish on a jig the month before the Classic. He caught them around slick logs on a shallow flat. But when he returned on a practice day during Classic week, he couldn’t buy a bite. As fate would dictate, desperate to find out if the highly promising school of fish were still living there, he put down the bulkier jig and reached for a tube.

“I thought to myself, “I’m gonna see if they’ll eat this goofy thing” -- and the first tree I pitched the tube to I got the kinda of good bite I had when I found those fish a month earlier,” reflects Brauer.

Brauer says he’s not sure if it was because shad had moved into that area, and the tube better emulated the shad than a jig, or exactly what the reason was, but using 25-pound monofilament, he even ‘boat flipped’ a 7 pound 12 ounce fish on a tube that ended up being the anchor fish of his 1998 Bassmaster Classic victory.

Much like a Senko, along with a tube’s magical way of getting bites when nothing else will, a tube also seems to have no seasonal limitations. Brauer’s win came in early August in the hottest shallow waters High Rock Lake, NC had to offer. Yet, I’ve caught bass recently on a super soft Big Bite Bait Tour Flipping Tube from the frigid winter waters of Northeastern Oklahoma.

“I think it’s definitely a year round bait,” says Brauer. “As anglers, we initially got conditioned to think tubes were a spawning season bait. But shoot, it’s very productive year round. As much as anything, it’s simply a finesse tool to pitch anytime the conditions call for it.”

Hook size and rigging are critical

More often than not, for 20 years now, I’ve always gravitated toward the 3.5” tube rigged with a 3/0 Mustad hook. Interestingly, and very intentionally, following his Classic win on the 3.5” tube, Brauer had Strike King design a larger 4.5” tube so he could match it with a larger 4/0 Mustad hook he felt would put more fish in the boat than the smaller 3/0 hook.

The bottom line is, pitch the size you’re most comfortable with. But one thing is absolutely certain, it’s imperative you match the tube size to the hook size. In my experience a 3.5” tube demands a 3/0 hook, and a 4” or 4.5” tube marries best to a 4/0 hook.

Lastly, do not, I repeat, do not bury the hook point into the tube, or you’ll say bad words over the number of fish you lose after setting the hook. Instead, simply lay the hook point level on the back of the tube when Texas rigged – it will still perform plenty snag-free, and lead to far better landing ratios.

You can choose to rattle, but let the bass choose the weight

Lure rattles are kind of like Las Vegas or sushi. Some people love it, some people hate it. Personally, I believe there’s goodness to adding sound to these little finesse style morsels. So I stuff a glass rattle inside the body of my tubes about 80-percent of the time.

Like rattles, line size and worm weight size are also a personal preferences that ultimately come down to water clarity and whatever preferred fall rate the bass seem to favor. A lot of anglers use 20-pound test with a ¼ ounce weight as a pretty standard set-up. Brauer goes much meatier with 3/8 or ½ ounce weight and 25 pound Seaguar fluorocarbon, while yours truly has caught ‘em for years with a 1/8 ounce weight and 15 pound old skool Big Game mono that’s as tough as the titanium in Brauer’s recent shoulder replacement.

Be a “line watcher”

No matter what size tube, line size, or worm weight you choose – learn to be a “line watcher.” You need to make a vigilant habit of watching the behavior of your line where it meets the water after every single pitch or flip. Tube bites are often a bit unique. Very seldom do bass just thump a tube. My theory is a tube gently glides into their space, and it’s kind of like they’re eating a potato chip rather than chomping on a bite of rib eye steak. Often times your line will just kinda stop falling like it’s been razor-bladed or attached to a feather – if so, set the hook!

Lures are like country music artists. Some bust on to the scene, score a couple hits, and soon fade from popularity. Others score hits early, and may fade from glory for just a bit, but make a solid rebound to prove true talent never goes away.

That said, it’s fair to say pitchin tubes have proven to be a whole lot like George Strait, Reba McEntire and Brooks & Dunn – all were mega stars about the same time Brauer won the ’98 Classic, and they’re still playing to sell out crowds 20 years later.