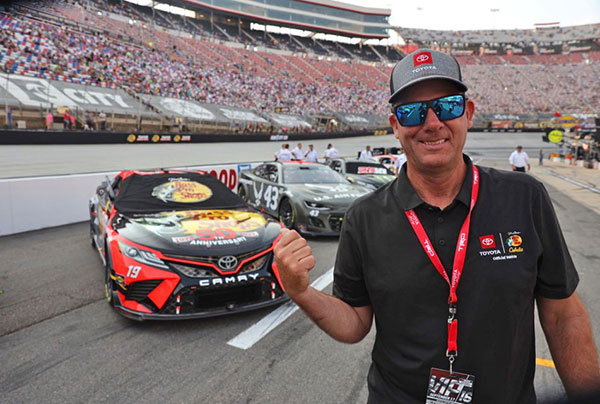 Trophy presentations are certainly nothing new to Kevin VanDam. But when Bass Pro Shops founder Johnny Morris asked “KVD” to join him in victory lane to present the winner’s trophy recently at NASCAR’s Bass Pro Shops Night Race at Bristol Motor Speedway, the longtime Toyota angler was a bit astonished.

Longshot driver Christopher Buescher won the race, and not only did VanDam help with the trophy presentation, but he may very well have won the award for the guy who had the most fun at the iconic half-mile track on the Tennessee-Virginia border.

His day began with a visit to the local Bass Pro Shops store where Toyota was offering fans the chance to take a ride in the all new 2022 Tundra, and then it was off to the track where he did a fishing seminar for race fans, got a little mud on the tires at Toyota’s ride and drive course, presented driver Martin Truex a ‘good luck’ crankbait, and even got invited to take a lap in the ‘pace truck’ to begin the race.

“I’ve had some phenomenal experiences around NASCAR, and Johnny asking me to join him in victory lane at Bristol was certainly one of them. But like most things in life, it’s all about people. I’ve become close friends with drivers Martin Truex, Jeff Burton and Ryan Newman, as well as some of the car chiefs like “Cheddar” and so many others,” says VanDam.

“Tons of people in the NASCAR community love to fish when they’re not busting their tails to win races, and there’s no sport I follow more closely than NASCAR when I’m not on the water. My radio is turned to the NASCAR station on Sirius XM about 90% of the time in my Tundra,” he says.

“I love the short tracks like Bristol and Richmond where you’re so close to the action, but there’s a whole lot to be said for standing near the wall at the super speedways when the cars blow by you in a pack at 200 mph,” smiles VanDam. “The bottom line is I just love NASCAR,” he grins.

No doubt, the multitude of memories he made last Saturday at Bristol only deepened his passion for the sport that runs just a short lap behind bass fishing on the list of sports he loves.