Wheeler Takes Over Lead At Bassmaster Classic On Tennessee River 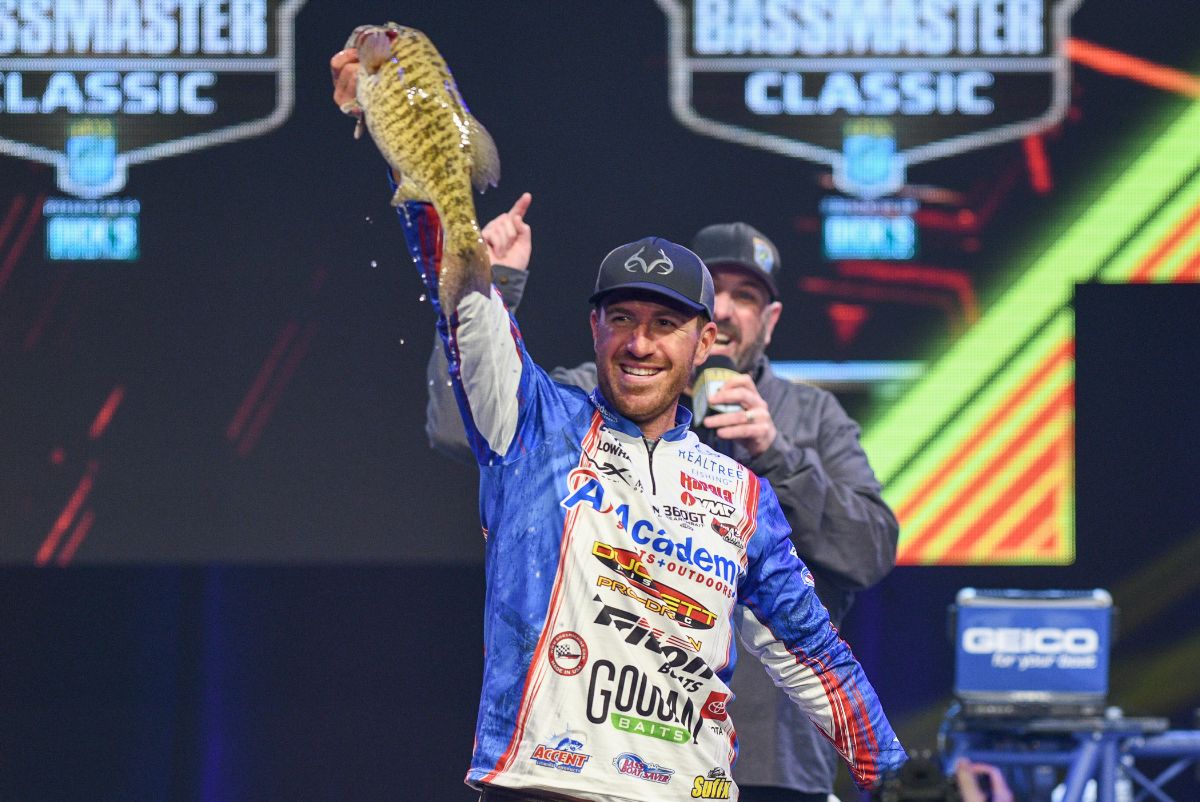 Jacob Wheeler of Harrison, Tenn., took the lead on Day 2 of the 2019 GEICO Bassmaster Classic presented by DICK'S Sporting Goods with a two-day total of 32 pounds, 6 ounces. Photo by Andy Crawford/B.A.S.S.

KNOXVILLE, Tenn. — During the early portions of practice for the GEICO Bassmaster Classic presented by DICK’S Sporting Goods, Jacob Wheeler discovered a pattern that he knew would put bass in his livewell.

But since it seemed a little too obvious, he spent the latter portions of practice looking for something he thought no one else would find.

He ultimately went back to the obvious — and it has him in position to win the Super Bowl of Bass Fishing.

fter landing 14 pounds, 11 ounces during Friday’s opening round, Wheeler caught five bass Saturday that weighed 17-11 and sprang into first place with a two-day total of 32-6. His five-bass limit Saturday was one of the few weighed in this week that featured all smallmouth.

“I know this crew,” Wheeler said. “I knew they would figure out the same thing I had figured out. Even though there are miles and miles and miles of water, they were going to figure it out.

“I tried to move around the lake, be smart about it and just fish what looked good to me — looking for that needle in the haystack. But I never found it, so I just had to fall back to what I knew I had.”

No angler on earth is more guarded with his techniques than the one who leads the Bassmaster Classic heading into the final round. So Wheeler only said that he was fishing a “reaction bite” with moving baits.

He said catching five smallmouth Saturday was a surprise.

“If you would have told me at the start of the tournament that eight of my 10 fish so far would be smallmouth, I would have said there’s no way,” Wheeler said. “It’s been so hard to catch a smallmouth — even a nonkeeper.”

“That is not something I thought I had dialed in at all.”

Wheeler, who has two career Bassmaster Elite Series victories — one on Chickamauga Lake and one on Cherokee Lake — actually relocated from Indiana to Tennessee two years ago. He now lives on Chickamauga and said the knowledge he’s gained on that fishery has played into his success this week.

“We don’t have smallmouth on Chickamauga, but these fish are set up a lot like the ones I fish for at home,” he said. “So that knowledge gives me a little something in my back pocket.” Wheeler earned the GEICO Everyday Leader Award of $2,500 for finishing atop the leaderboard today.

Wheeler’s catch was just enough to help him edge Alabama angler Mark Daniels Jr., who moved into second place with a Day 2 catch of 17-6 that pushed his two-day mark to 31-14. Daniels said he caught most of his bass Saturday on an original Bill Lewis Rat-L-Trap, including a 6-3 largemouth that gave him the lead in the Berkley Big Bass competition.

Daniels said he used the red crawfish-colored Rat-L-Trap and changed the factory hooks to Owner ST-56 No. 4 short-shank trebles.

“They’re just such a sharper hook, and I think that’s really key,” Daniels said. “When that big fish came to the top, I could see it had both hooks in its mouth — one in the corner of its mouth and one down under its chin.

“I knew that fish was never coming off, so I just took my time and landed it.”

The biggest mover of the day was Texas pro Chris Zaldain who brought in a tournament-best limit that weighed 21-12 and jumped from 28th place into third with a two-day total of 30-12.

Like Wheeler, Zaldain said returning to the obvious pattern helped him on Day 2.

“I fished a pattern today that I didn’t get a chance to fish on Day 1,” Zaldain said. “I made a bad decision, and I ended up having to resort to some smallmouth tactics that gave me the 9 pounds I weighed in.

“Today, I fished the patterns, the areas and the bait that I originally intended to fish.”

“At one point today, I probably went 10 for 10 on pointing at spots on my graph and telling my marshal we were about to get bit,” he said. “Within two casts, it would happen.

“I’m to the point where if it doesn’t look exactly right, I don’t even stop.”

The tournament will resume Sunday with takeoff at 7:40 a.m. from Volunteer Landing and weigh-in at 4:15 p.m. at Thompson-Boling Arena. The weigh-in will culminate with the crowning of a new world champion and the awarding of the $300,000 first-place prize. The other 51 anglers will share in the remainder of a $1 million total purse.