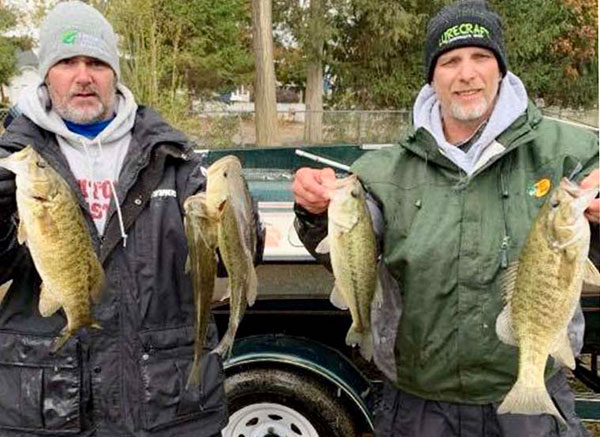 The winners said they had their 8.43-pound limit in the first 30 minutes using blade baits in 5-7 feet of water and that they made small culls throughout the day. They also had big bass of the tournament, a 2.74-pound smallmouth. They won $200 for first and $50 for big bass and said this was their first tournament win.

The tournament drew 11 teams on a day in which air temperatures were in the low 40s under partly cloudy skies and a mild breeze. Eight teams weighed in fish and four limits were caught.

Tackle Shack Owner Brenden Sutter and Andrew Miller were second with 8.38 pounds earning them $125. In addition, they were able to corral a 3.34-pound northern pike which won them the critter pot and an additional $50. They were observed catching several fish on an A-rig.

Jeremy Bunnell and Lee Duracz were third with 6.82 pounds to win $50. They threw blade baits, tubes, and swimbaits to grind out a limit.

The husband and wife team of Steve and Amy Martin finished fourth with a limit weighing 6.53 pounds.

The next Polar Bear Open is Saturday on Lake Wawasee from 7:30 a.m. 2:30 p.m. at the Wawasee Public Access on the South Side of the lake.