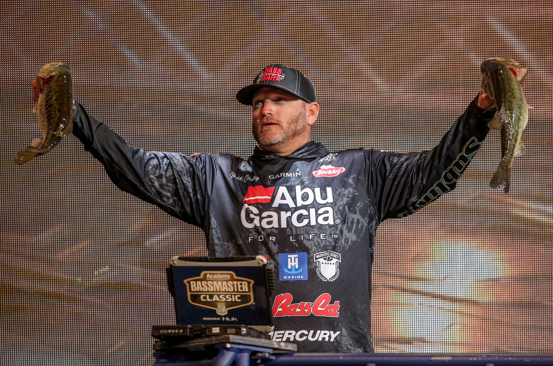 Hank Cherry, of Lincolnton, N.C., is leading after Day 2 of the Academy Sports + Outdoors Bassmaster Classic presented by Huk with 45 pounds, 13 ounces. - Photo by Seigo Saito/B.A.S.S

BIRMINGHAM, Ala. — If Hank Cherry’s arm is bothering him, it certainly doesn’t show.

The North Carolina veteran pro, who fell and injured his arm in his boat Friday, played through the pain Saturday to catch five bass that weighed 16 pounds, 10 ounces. Added to the 29-3 he caught Friday, it gives him a two-day total of 45-13 that leads the Academy Sports + Outdoors Bassmaster Classic presented by Huk

Competition is taking place at Lake Guntersville, and weigh-ins are being held at the Birmingham-Jefferson Convention Complex. Cherry’s solid Saturday catch gave him a lead of 4-13 going into Championship Sunday with a $300,000 first-place prize on the line.

“I’m gonna do what I’ve got to do to get this done,” Cherry said. “New fish are still moving into my area. I’ve just got to relax — and if it’s my time, it’s my time.”

Cherry fished the same three baits Saturday that he used to catch his massive bag Friday — a bladed jig, a jerkbait and his own Hank Cherry Signature Series Jig from Picasso. He’s fishing one small area with a causeway and a flat, and he’s done so little running that he hasn’t even had to buy gas for his boat this week.

Now, it’s just a matter of settling down and finishing the job.

“My last thoughts before I go to bed tonight will just be to thank the good Lord for putting me in this position,” said Cherry, who finished third in the 2013 Classic at Grand Lake in Oklahoma. “Then I’ll just get up in the morning ready to go.

“I have to stay relaxed. I have to get that first one in the boat. The first one’s always the roughest one. After that, they start coming.”

The angler closest to Cherry going into the final day is Fayetteville, Tenn., pro Brandon Lester, who caught 20-1 Saturday and jumped from fourth place into second with a two-day mark of 41-0.

Lester started his day with a lipless crankbait and caught a limit early. But since he didn’t have the quality of fish he knew he’d need to win, he made a drastic change.

“There’s this one stretch of boat docks where I’ve caught them before,” Lester said. “I just had a hunch they would be there, so I went there and fished a jig.

“I thought they’d be there, but I didn’t know they would be that big.”

Lester’s catch was anchored by a 6-7 largemouth, as he managed to cull all but one of the original five bass he caught early on the crankbait.

He said plan B has now officially become plan A.

“I didn’t fish that stretch of docks at all (Friday),” Lester said. “I saved it as a backup plan, and I’m glad I did.

“Today, the way the wind was blowing in there, straight out of the north, I could really only fish the back sides of the docks. Hopefully tomorrow, if that wind will kind of lay, I can pick some more off.”

Virginia pro John Crews will start Championship Sunday in third place after catching 16-11 Saturday and pushing his total to 38-3.

“I had to change gears today,” Crews said. “The first few areas I went to where I caught some (Friday) … they just weren’t there. I don’t know if it was the wrong time or whatever, but I didn’t have a bite.

“I just kept moving, kept fishing — and luckily, I was able to put together a decent limit.”

Crews said he his game plan for Sunday would likely be a last-minute thing.

“I’m not married to any certain spot. That might be good because I’ll just be fishing.”

The angler who made the biggest move on Day 2 was Texas pro Keith Combs. With the day’s biggest bag of 23-10, he jumped from 43rd place into 13th. Canadian pro Jeff Gustafson earned Berkley Big Bass honors for the day with a 7-3 largemouth, but South Carolina angler Todd Auten still holds the lead for big bass of the week with the 7-9 he caught Friday.

The tournament concludes Sunday with the Top 25 remaining anglers taking off at 7 a.m. CT from Civitan Park in Guntersville. Fans planning to attend the takeoff should make note of the time change for Daylight savings time.