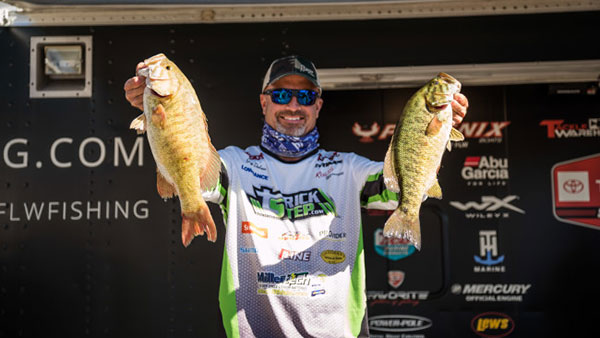 Pro Scott Dobson of Clarkston brought a five-bass limit to the scales Saturday weighing 18 pounds, 9 ounces to win the three-day Toyota Series at the Detroit River.

Dobson's three-day total of 15 bass weighing 59-3 earned him the win by a 1-pound, 7-ounce margin over second-place angler Troy Stokes of Brownstown, Michigan, and earned Dobson the top payout of $27,534 in the third and final tournament of the 2020 Toyota Series Northern Division.

"I appreciate them making the call to keep us all in the river day one and two, I don't think I've ever fished 16 hours in the Detroit River in two tournament days," said Dobson. "I grew up here in Trenton, I see a lot of Trenton people here, it's awesome to win a big tournament out of Trenton." 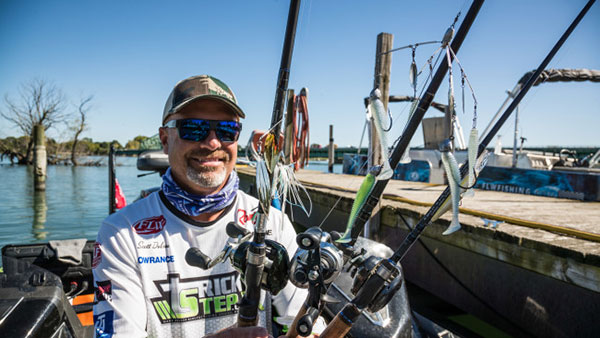 Dobson's baits this week ran the gamut, but aside from a few fish caught on dragging baits, his main players were moving baits. His umbrella rig of choice was a Shane's Baits Mini Blades of Glory with Keitech Swing Impact swimbaits. For his spinnerbait, he used a æ-ounce War Eagle Spinnerbait with gold and silver willow blades and a trailer hook. On the jerkbait side of things, Dobson wielded a Megabass Vision 110+1, a Lucky Craft Pointer and a Duo Realis Jerkbait 100DR.

His dragging baits included a 5-inch tube on a æ-ounce head and a magnum Ned rig with a Z-Man Giant TRDcut in half on a Ω-ounce Nichols Lures Magnum Ned Rig Jig Head. He also mixed in a drop-shot with a Poor Boy's Erie Darter and a 3/8-ounce weight.

On days one and two, Dobson targeted fish in the river, catching a few off a rock pile on a flat, but catching most of his fish in current on the faces of points and breaks. In some places, he threw the umbrella rig, and on other spots he slow-rolled the spinnerbait in water as deep as 15 feet.

Saturday, Dobson started in the river on a community hole at the mouth, some shallow rock and a couple of deeper current spots. Then he burned up to the mouth of the St. Clair River.

"I knew it was still going to be rough, but I wanted to get three in the box," Dobson said. "I knew there was another tournament up there, and I wanted some fish in the box in case I got there and couldn't get on anything or they had snatched a few."

Once in St. Clair, Dobson got on a spot at the mouth of the river that was loaded with fish, but they were barely catchable for him. His first cast produced a 4-pounder, he broke off another on the next cast and then failed to catch any quality the rest of the time. So, he headed back down into the river.

"With 5-minutes to go I caught a 4-pounder," says Dobson. "I slow-rolled the spinnerbait up the face of a point, probably 12 feet down, and she hammered it, and then I came in."

The top 10 pros on the Detroit River finished:

A complete list of results can be found at FLWFishing.com.

Burton took home an extra $1,000 as the highest finishing FLW PHOENIX BONUS member. Boaters are eligible to win up to an extra $35,000 per event in each Toyota Series tournament if all requirements are met.