April Showers may bring May flowers, but it also brings a rush into the bass tournament season.

As tournament groups gear up for the regular season, some are planning “Opens” which usually means no membership fee and anyone can enter. These events are used as fund-raisers.

There are three events (that we know about) coming next weekend.

The Dennis Losee benefit on the St. Joe River at 6 Span - that was previously scheduled for this weekend - was moved to April 2nd. Entry fee is $65 with 50 percent of the pot going to Michiana angler Dennis Losee who suffered a stroke and needs help paying medical bills.

In addition, Clear H2o Tackle will donate an additional $25 for each boat entered and an additional $25 per any winners of side pots who donate their winnings back to the cause. Plaques will be given to the top three finishing teams.

If river fishing isn’t your thing, Casting Couples will be having an Open the same day at Lake Maxinkuckee. The tournament is open, meaning there are no gender restrictions on teams. Hours are 7-1 and entry fee is $50 plus $5 for big bass. You can fish alone, if you wish.

If you can’t get enough tournament fishing on Saturday, the Angola Hog Hunters will have an open Sunday, April 3 on Lake Hamilton in northeastern Indiana. Hours are 7-3 and entry fee is $100. Call Kevin Days, 260-243-0266 for more info.

Hopefully, the weather will improve and the fishing is good!

For the remainder of the season, follow our Lake Drive Marine Events Calendar which lists specifics of tournaments and dates. If your event isn’t on the schedule, email us at stoutoutdoors@comcast.net.

Thomas/Terry Use Big Limit to Win R&B at Tippy 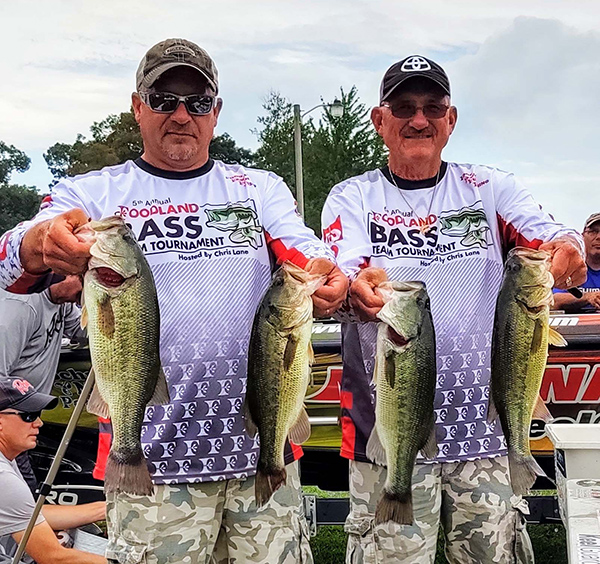 Larry Thomas (Kendallville) and Dave Terry (Albion) beat out 40 teams and won themselves $700 in a recent R&B Circuit event on Lake Tippecanoe.

The duo had a 15.63-pound limit caught with drop shot rigs and homemade jigs on the outside of weed edges between 5-15 feet of water. They worked through two areas on the lake and caught three limits of bass.

Kyle Kaser (Plymouth) fished alone and weighed 14.16 pounds to win $420. He slung bladed jigs in five different channels. The fish were set up on the first drop off of shore.

Andy Brossia came from Ohio to put together a 14.03-pound limit by working a hollow bellied frog in lily pads. He had culled 8 times by 10:15, but never caught another fish after that time. He won $315.

The winners caught their fish on jigs.

Bo Thomas and Jackson Disher were second with 9.20 pounds caught on 1/-2 ounce white War Eagle spinnerbaits fished over the top of weed edges while Scott Crocker and Terry Smith were third with an 8.53-pound limit caught on jigs and wacky worms.

Although Casting Couples regular season events are for man/woman teams, the Open is available to all-male teams.

The tournament is a fund-raiser with an $80 entry fee. Hours are 6 a.m. to 2 p.m. and they will use the Clinton River cutoff ramp.

The tournament is the day before the R&B Circuit there and tournament director Rick Kedik said R&B competitors who are there to practice are welcome to fish. Call or text Kedik at 269-240-4917.

Lake Drive Marine will be the title sponsor of two Michiana qualifying series that kicks off in early April and could earn anglers berths in the Kahlo Cup held near the end of the year.

Lake Drive Marine, located in Coldwater, Mich., ran a “test” event last fall and it was an overwhelming success. The event was won by South Bend native Greg Mangus of Fremont, Ind.

“Everyone said it was the most exciting format they had ever fished,” said Lake Drive Marine President Jeff Uetrecht. “Based upon that excitement and overwhelming interest, we decided to sponsor two more qualifying series and an invitational this year.”

The field for the two series will be limited to 24 in each series and Uetrecht expects the events to fill up within a couple of weeks.