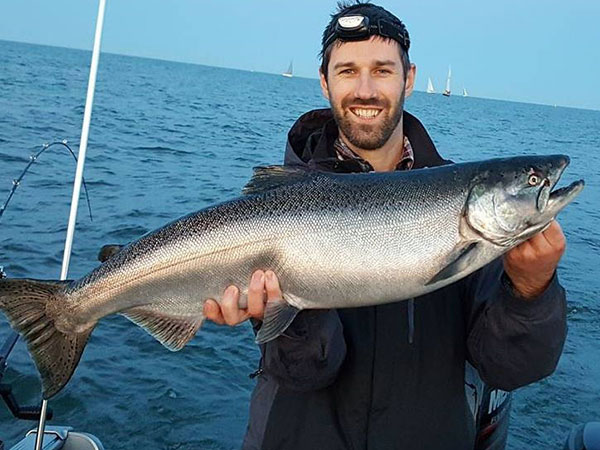 Warm weather has hampered the fall trout and salmon run, but the good news is you can expect to see bigger fish in Michiana streams and rivers.

King salmon have been more prevalent on Lake Michigan this summer and are beginning to show up in streams. That’s good news for anglers, as those fish haven’t been much of a factor in previous fall runs.

“Last year it took us 3 to 4 weeks to collect 18 kings for our sampling,” said Lake Michigan Biologist Ben Dickinson. “This year we got 35 kings in one day last week.”

Several coho and king salmon have been moving up the St. Joseph River through the Berrien Springs, Mich. fish ladder but high water temperatures have kept the majority of those fish from making it to Indiana.

And with more warm temperatures still in the immediate forecast, that could continue to stall the run until river temperatures drop.

That also has hampered the Skamania steelhead run although Dickinson said a couple hundred fish have been counted going through the South Bend ladder the past couple of weeks.

And they are big, ranging from 20 to 30 pounds among the fully mature kings to 12 to 20 pounds for the three year olds and even some 3- to 5-pound young males are migrating up the creek.

This is good news for salmon fishermen, as the king run has been dismal in recent years, which Dickinson said was due to poor survival while living in the lake.

However, there are strong indications that alewife forage base population is rebounding and the kings are benefiting by being healthier and bigger.

“We’ve seen several 20-pound- plus fish caught in Indiana waters and quite a few weighing in the mid to high 20s,” “I think that’s an indication our stocking cuts have worked, the alewife population is coming back and the salmon are doing much better.”

The steelhead should be bigger, too. The biologist said his crew saw quite a few mid- to high-teen Skamania when they were doing their brood stock collection.

“Some were pushing 20, and we’ve seen some nice ones caught in Trail Creek,” Dickinson added.

Lake Michigan boat anglers have been catching kings and coho in inshore waters when the colder water is pushed closer to the shore.

Indiana doesn’t stock kings in the St. Joe but Dickinson said some stragglers likely will make it into South Bend. Coho are stocked and he’s hopeful that Indiana St. Joe anglers will see quite a few of those once the water cools.