PRADCO Outdoor Brands, a leader in top-name fishing and hunting products, announced today that it has acquired Gene Larew Lures, a Tulsa, Okla., company that manufactures and sells fishing lures under its Gene Larew, Bobby Garland and Crappie Pro brands.

"Today, we've added two more legendary names - Larew and Garland - to our already historic lineup of fishing brands," said PRADCO's Bruce Stanton, Vice President and General Manager of the fishing division. "In addition to growing our bass offerings with Larew and jumping right to the top of the crappie bait category with Garland, we're also getting a wealth of manufacturing experience, industry knowledge and fishing expertise that fully complements the things we do that put us at the top in this industry. We're excited!"

"Only a couple hours up the road from Ft. Smith (Arkansas), we know PRADCO, Bruce and many of his team, so I'm elated to be passing along my company to them because I know it'll be in great hands," said Gene Larew Lures owner, Chris Lindenberg. "They have proven themselves to be a great caretaker of the brands that I grew up fishing with, and I wanted Larew and Garland to have a permanent next home in such a prominent place. I couldn't be any happier than having PRADCO be the ones to take our efforts to the next level and beyond."

Gene Larew and Bobby Garland were two early day pioneers of the soft plastic lure industry. Mr. Larew became famous for adding salt into baits with his Salt Craw. Mr. Garland was first known for his bass lure creations, one being the Gitzit, and then later for his crappie designs, including today's top selling soft-plastic crappie bait, the Baby Shad.

Lindenberg brought the two names together under one roof soon after he bought the Gene Larew brand and formed Gene Larew Lures in 2006. Later he added the Crappie Pro brand, a product line of premium jigheads, in 2015.

Lindenberg will remain involved with the Gene Larew Lures operation throughout the transition, and thereafter, for as long as he wishes. He will also continue to run his other businesses in Tulsa, with Western Filter Co. requiring much of his attention in serving the active midstream sector of the oil and gas industry.

Other Larew personnel, including Eli Smith, George Toalson and Gary Dollahon, will continue their roles with the Larew, Garland and Crappie Pro brands under the guidance of PRADCO. 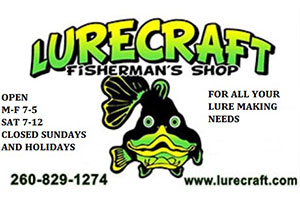