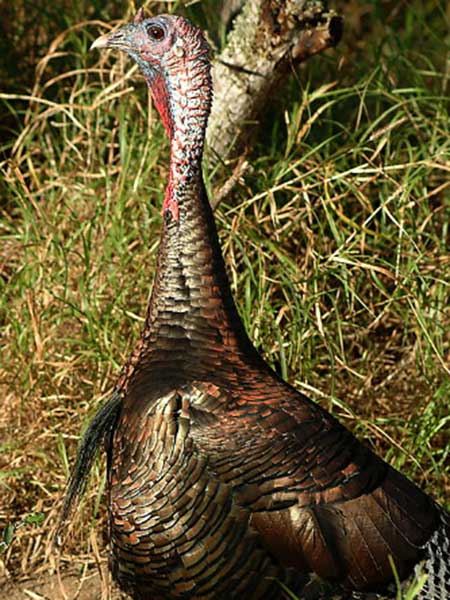 Hunters can kill one male or bearded turkey in the spring season, which runs through May 11. A two-day youth season this past weekend gave young hunters a chance to bag a bird before the regular season opened.

"I expect hunters to take 11,000 turkeys, plus or minus a thousand," Backs said.

In recent seasons, Backs said harvest numbers are trending slightly downward because the turkey population in Indiana and the entire eastern United States is stabilizing. Turkey populations have grown steadily over the last 50 years after states reintroduced the birds to areas where they had been eliminated by loss of habitat and unregulated subsistence hunting.

We're still going to have a good turkey season, but after a few decades of ever increasing harvests, our turkey population growth is stabilizing with a lower level of annual production, something seen in many other statesî Backs said.

Wild turkeys were eliminated from Indiana by the early 1900s. A reintroduction program from 1956 to 2004 released almost 3,000 wild-trapped birds throughout the state.

Now natural disease and predators are catching up with those restored turkey populations, Backs said. Turkey eggs and poults are vulnerable to predators that range from blue jays to coyotes.

Weather could also play a role in harvest numbers. The especially frigid winter may have killed more turkeys than normal. And the slow start to spring will mean there is less vegetation in the woods than normal, making it easier for turkeys to see an approaching hunter.

To hunt wild turkeys, a valid turkey hunting license (regular or apprentice) and a valid game bird habitat stamp are required. Hunters who have a lifetime comprehensive hunting license, a lifetime comprehensive hunting/fishing license, or a resident youth hunt/trap license do not need to purchase the game bird habitat stamp because it is included with those license types.

An apprentice license is available to anyone, including hunters born after Dec. 31, 1986, who have yet to complete the requirement of hunter education. All persons, regardless of age, are limited to three apprentice licenses in their lifetime.

All turkeys must be properly tagged and checked-in at an official turkey check station or through the DNRís CheckIN Game program (CheckINgame.dnr.IN.gov or 1-800-419-1326). A list of check stations is available in the 2013-2014 Hunting and Trapping Guide or at wildlife.IN.gov. The phone-in option of CheckIN Game includes a $3 service charge.