The Fishin’ Is Great, But Perch are Tops on The St. Clair Dinner Menu 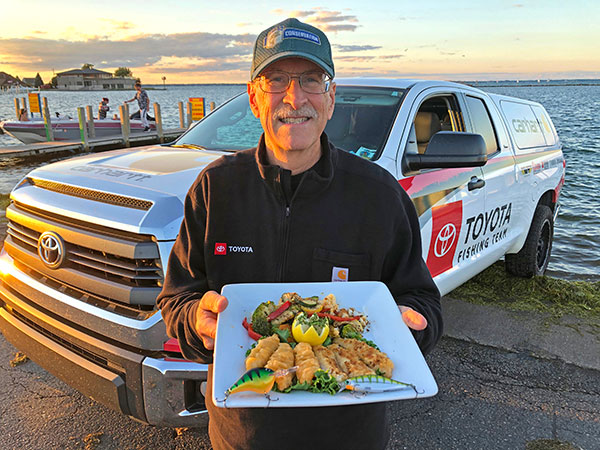 “My favorite place for fried perch is Benvenuto’s,” says Gene Gilliland, Conservation Director for B.A.S.S., and a hard-core bass angler who makes an annual pilgrimage from his home in Oklahoma to chase St. Clair’s legendary smallmouth each year with a group of good buddies.

Fact is, at St. Clair, yellow perch are the top menu item of choice not just for guys like Gilliland, but smallmouth too. “There are plenty of gobies in St. Clair, but they’re not necessarily the star of the show at St. Clair like they are on the St. Lawrence, and that’s largely because gobies eat zebra mussels which thrive on rockier bottoms, and St. Clair is largely a sandy lake bottom,” says Gilliland, who worked 32 years for the Oklahoma Department of Wildlife, focusing largely on bass research.

Ironically, St. Clair was the first American fishery in which zebra mussels were discovered in 1990, and sure enough the gobies soon followed to chow down on them. But yearly populations of mussels and gobies have fluctuated, whereas natives like yellow perch, crawfish, spottail shiners, gizzard shad, and emerald shiners have remained far more prolific and consistent forage options.

“When the Bassmaster Elite Series was here in 2013 there was actually concern about the smallmouth looking so skinny, and we think it was because the goby population that our buddy Mark Zona calls “chicken wings for smallmouth” was badly depleted. It was like the smallmouth forgot how to find perch and shiners because they had become so accustomed to eating gobies for a few years prior,” grins Gilliland.

“As a St. Clair smallmouth angler, you quickly figure out crankbaits and jerkbaits that swim through the middle of the water column are just as likely to get crushed by big smallies as bottom bouncers because these fish are used to feeding by sight in more open water situations,” explains Gilliland.

For example, Gilliland throws a Rapala DT10 crankbait in a yellow perch color that dives down to 10 feet deep over 13-feet of water, because the fish aren’t necessarily on the bottom, but instead suspended and looking for a fat perch to eat.

This week, Gilliland will work diligently on behalf of B.A.S.S. at the Bassmaster Elite Series tournament to assure excellent care of the St. Clair smallmouth he treasures, but in the evenings look for him at Benvenuto’s in Harrison Township with a plate full of fried perch.