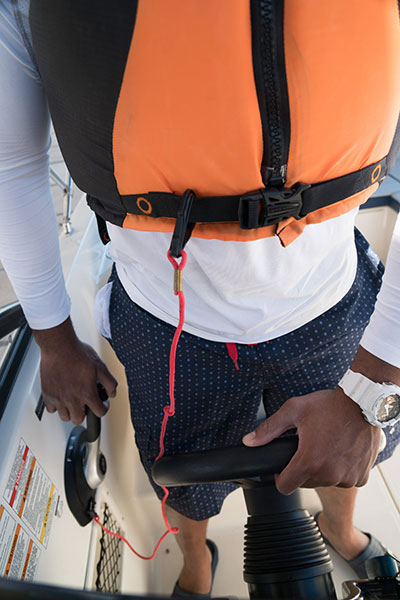 There are new engine cutoff device wear requirements for recreational boat operators as part of the January 1, 2021, passage of National Defense Authorization Act that included a U.S. Coast Guard Reauthorization.

These devices, commonly referred to as engine cutoff switches (ECOS) or ìkill switches,î are designed to prevent a boat-strike injury if an operator is accidentally ejected overboard while underway.

Engine cutoff devices can be located at the helm of the boat or on the tiller or body of an outboard engine and typically connect a boatís operator to the cutoff switch with a lanyard. Some ECOS devices eliminate the lanyard and rely on wireless proximity devices to shut down an engine if the operator goes overboard.

Effective April 1, the new law requires a vessel operator to use either a helm or outboard lanyard or wireless ECOS on vessels less than 26 feet when traveling on plane or above displacement speed. These vessels include (1) boats that have a functioning engine cutoff device installed at the helm or on an outboard engine or have wireless ECOS, or (2) boats manufactured beginning January 2020. The Coast Guard increased the number of boats required to have ECOS installed after this date in an effort to reduce boating accidents and fatalities.

Exceptions to the ECOS requirement include if the main helm of the vessel is in an enclosed cabin or the vessel is not operating on plane or at displacement speed. Low-speed activities such as fishing or docking do not require use of an ECOS. The vessel operator is also exempt if the boatís motor produces less than 115 lbs. of static thrust ñ or about the size of a 2-hp engine.

The new law applies to all federally navigable waterways. As this is a federal law, states do not have the ability to enforce the new ECOS regulation ó though seven states (Alabama, Arkansas, Illinois, Louisiana, Nevada, New Jersey and Texas) currently have their own ECOS laws.

BoatUS expects most states to amend their regulations to match federal law over the coming years. While boat operators who fail to follow the new requirement could face a $100 civil penalty for the first offense, BoatUS expects the U.S. Coast Guardís initial focus will be education.

Boaters are encouraged to check the U.S. Coast Guard website for additional information on this new use requirement and other safety regulations and recommendations.

ìBoatUS supports responsible use of cutoff devices and wants to get the word out to boaters to be aware of this new requirement so they can prepare,î said BoatUS Manager of Government Affairs David Kennedy. ìWe believe the new requirement allows recreational boaters to operate their vessels in a practical manner while increasing boating safety.î

Kennedy suggests that boat operators double check to see that their engine cutoff switch is working and begin the season by getting into a good habit of wearing it.