Since 2012, DNR biologists have sampled pike in 17 lakes. To sample pike, biologists set large traps in areas that are likely to attract spawning pike. The typical catch is 18 pike per survey, and the majority are 21-28 inches long.

Vanderlugt is Named Michiana's District 10 Officer of the Year 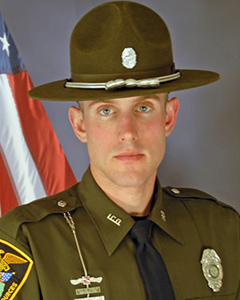 Ryan Vanderlugt has been selected as the 2018 District 10 Indiana Conservation Officer of the Year.

He has served as an Indiana Conservation Officer since 2011, originally assigned to Huntington County. In 2014 he was transferred LaPorte County.

The district award puts Vanderlugt in the running for the Pitzer Award, which is awarded to the stateís top conservation officer and is selected from the 10 district award winners.

The Pitzer Award is named after Indiana Conservation Officer James D. Pitzer, who was fatally shot while investigating illegal hunting activity on Jan. 1, 1961 in Jay County.

Several items will be on sale and anglers will be able to check out new items added to the shop’s lineup.

The Three Rivers Fly Tiers will be on hand to demonstrate fly tying. Coffee, donuts and hotdogs will be available.