Indiana Conservation Officers responded Wednesday to a report of three fishermen who had fallen through the ice on Big Turkey Lake in Steuben County.

At approximately 3:30 p.m., the†county communications center received a 911 call that the fishermen had fallen through the ice near the 10200 West block of County Road 475 South.

Brad Levitz, 61, of LaGrange and his son, Bradley Levitz, 40, of Hudson, were attempting to walk on the ice to go fishing when the incident occurred. Brad Levitz, realizing the danger, began to return to shore when his son fell through the ice approximately 200 yards from shore.

Hoosiers Can No Longer Take Cisco Fish from Indiana Waters 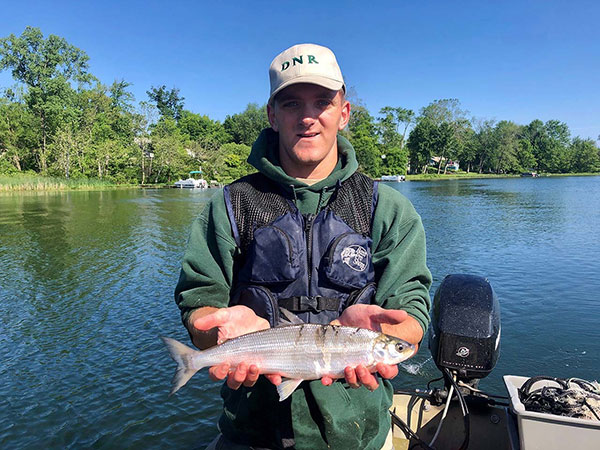 Beginning Dec. 17, it will be unlawful to take or possess the cisco species of fish from Indiana waters.

The change is a result of action taken this fall by the Natural Resources Commission (NRC). Previously, this native fish was listed as a species of special concern.

Cisco (Coregonus artedi) is the only native fish from the salmon family found in Indiana waters other than Lake Michigan. It is a cold-water species that requires exceptional water quality to thrive. The glacial lakes of northern Indiana represent the southernmost extent of the species' range in North America.

A parking lot may not sound like something that is important to conservation, but in a time when most people drive to their destinations, parking is a necessity. Without a legal parking area, outdoor enthusiasts run the risk of returning to their vehicles to find they have been ticketed or towed. How can people experience the wonders of outdoor recreation and care about the conservation of public lands if they are unable to access these places?

The Indiana Natural Resources Foundation and the Indiana Muskie Club recently worked in partnership with the DNR Division of Fish & Wildlife to purchase land along Kuhn Lake in northeast Indiana to solve the parking problem for local boaters and fishermen. The solution was to create a legal parking area for outdoor enthusiasts.