The 2012 Indiana early migratory bird season dates have been submitted to the U.S. Fish and Wildlife Service by the Indiana DNR.

As in other years, these dates are not final until the USFWS approves them, which typically happens by the end of August. The season dates fall within the framework provided by USFWS, so no changes are anticipated. A later Wild Bulletin will notify you of approval or change. 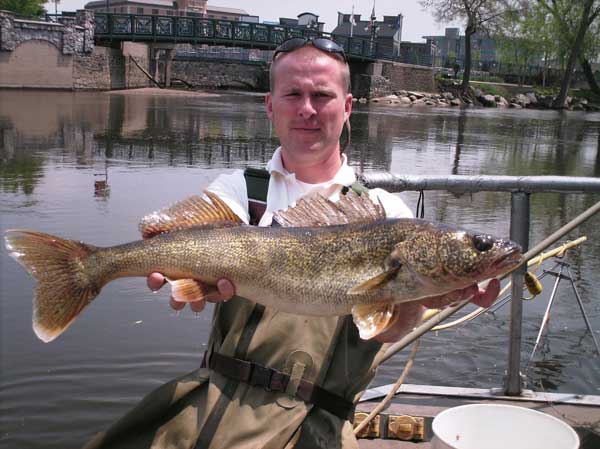 Walleyes are coming to the Elkhart River.

Elkhart biologist Dar Deegan shows off a nice walleye he captured below the Elkhart Dam during a fish survey. Deegan says there are walleyes like this in the Elkhart River and he hopes more will turn up in a few years after a planned stocking effort.

Thats the plan of the Elkhart River Restoration Association (ERRA), a non-profit group that hopes to stock 2,000 advanced fingerlings between Elkhart and Goshen and another 1,100 for the river above the Goshen Dam yet this fall.

The project hinges on whether a Wisconsin fish farm can produce the fish given this summers unseasonably warm weather.

People who use Indiana's lakes and reservoirs for recreation should be aware that blue-green algae blooms have the potential to cause health problems in humans and animals.

Blue-green algae blooms are a seasonal occurrence in some Indiana waters, fueled by summer heat, sunlight and fertilizer runoff from lawns and farms. Drought and low water levels in lakes and reservoirs can increase blue-green algae quantities and/or toxins.

Classes run from 6 to 9:30 each night. The free course is offered by the Indiana DNR Division of Law Enforcement. Conservation Officers and volunteers will be conducting the course. Space is limited to the first 50 registered. You must attend all three nights of the course to graduate the course.