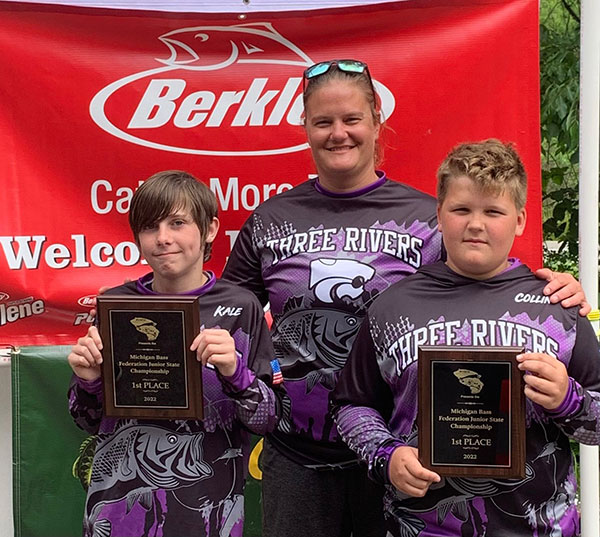 She found out first hand. When her son Collin approached her last year about starting a Three Rivers High School fishing club, she decided to investigate the possibilities.

“I sent out a survey to gauge students’ interest and heard back from more than 90 kids,” said Balk. “That’s three times as many that are on our football team so I decided I better look into it.”

Not only was the Three Rivers Wildcats Bass Fishing Team formed, but 40-some kids stayed active throughout the summer. 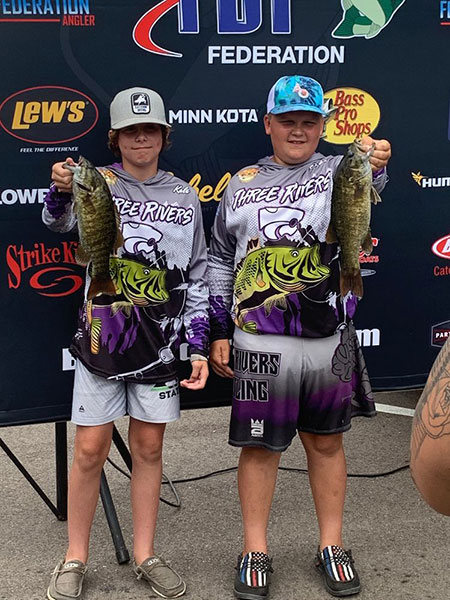 Kale Parr and Collin Balk hold two of the fish that helped them finish fourth in the World Championship.

And the eighth graders did it with Principal Balk as their boat captain even though she knew little about bass fishing.

“There were 49 teams from around the country at Kentucky Lake,” she recalls. “Most of the other kids had nice bass boats decked out with all of the latest equipment. We were there in our 16-foot Starcraft multi-species boat. The kids did their own research and planned the strategy. My job was to drive the boat.”

Balk and Three Rivers Police Officer Steve Dibble, who has a son in the club, spearheaded the program throughout last season. They solicited other parents to help and got them together weekly on-and-off the water where the kids learned more about fishing and got practical application.

They received a grant from Strike King Lures and Lew’s (rods and reels) and plan to give away tackle to the kids.

“We basically flew by the seat of our pants,” she said. “We held practices throughout the year, brought in cash donations and got jerseys for the kids. It’s been pretty amazing.”

Next year she plans to bring in seminar speakers and hold Monday night youth contests. While the event will be for bass, prizes will be awarded for other species.

“We’ll have kids fishing from boats and from shore,” she said. “We have some sponsorship money left over from last year to give awards.”

Balk says she’s been blown away by the interest and enthusiasm kids have for fishing. They study YouTube videos and read everything they can find about bass fishing.

“We’ve had the Western Michigan and Southwest Michigan college teams come in to talk to them and that’s helped create more college interest among the kids,” says Balk.

“I swear, they have learned more about (aquatic) science through fishing than from a school science program.”