Darrell Lowrance, founder of Lowrance Electronics and creator of the first recreational fishfinder electronics, died last week of a stroke.

Lowrance’s first fishfinder, the Fish-Lo-K-Tor and often referred to as the “Little Green Box,” paved the way to today’s sophisticated electronics. Lowrance also was responsible for numerous other innovations in fish finding and navigational aids for anglers.

Lowrance Electronics is located in Tulsa, Ok. and presently owned by Navico.

A key initiative to its ‘Varsity Program’ focusing on high school and college age anglers, Shimano will again award more than $20,000 to both graduating high school seniors and those already enrolled in undergrad and graduate programs. The scholarships are intended to provide needed financial assistance to future leaders in conservation, fisheries and wildlife sciences and management.

Now in its third year, “the goal with our scholarships is to encourage and support young anglers to pursue a college degree in fishery management, scientific research and related natural resource professions”, said Phil Morlock, Vice President for Government Affairs/Advocacy for Shimano North American Fishing, Inc. “At Shimano, we understand the important role anglers have played as conservation leaders for well over a century. As B.A.S.S. members, we know these students have a first-hand appreciation for environmentally sustainable use and science-based management of natural resources. Where fishing happens, conservation happens.”

The Shimano/B.A.S.S. scholarship partnership is also intended to increase angler awareness of the critical decline in resource management professionals who fish within state, regional, provincial and federal agencies. The future of fishing will continue to rely on the combination of education, training and practical experience which this partnership encourages. 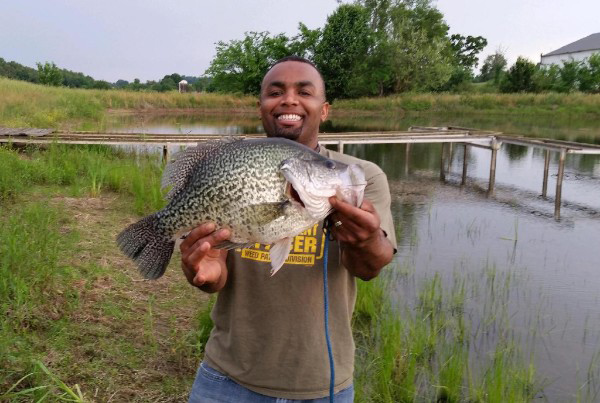 On May 15, 2018, Lionel "Jam" Ferguson made fishing history by landing a giant 5 lb. 7.68 oz crappie on a pond near Philadelphia, Tennessee. This fish vastly exceeded the state's previous record of 4 lbs. 4 oz caught in 1985.

Not only did this fish make the state record books, but it also made world history. The previous world record was 5 lbs. even. Therefore, after a genetic and weight confirmation, Ferguson became the new black crappie world record holder. 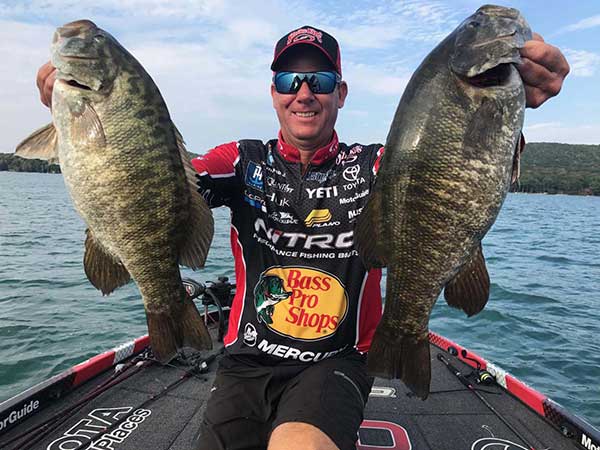 Six individuals who have helped make the black bass America’s most popular game fish have been selected for induction into the Bass Fishing Hall of Fame, the Hall’s board of directors announced today.

The Class of 2018, which will be inducted in ceremonies at Johnny Morris’ Wonders of Wildlife Museum and Aquarium in Springfield on September 27, 2-018, includes two stars of professional bass fishing — Kevin VanDam of Kalamazoo, Mich., and Gary Klein of Mingus, Texas — and four leaders from the sportfishing industry and its media.

Also being inducted are Tommy Sanders of Little Rock, Ark., a veteran outdoor television host; Helen Sevier of Montgomery, Ala., former CEO of B.A.S.S.; Berkley Bedell of Naples, Fla., founder of Berkley and Co.; and Dr. James Henshall, a 19th Century author who is considered the father of bass fishing.

“We on the board of directors are grateful for the efforts of the Selection Committee in identifying this year’s induction class,” said John Mazurkiewicz, vice president of the Hall of Fame Board and Nomination Committee chair. “The new selection process, which went into effect this year, helps ensure that we are again inducting some of the great pioneers in bass fishing.”

The six will be enshrined in the Hall of Fame museum, which opened last November within the Wonders of Wildlife complex at the flagship Bass Pro Shops store in Springfield.

The Bass Fishing Hall of Fame is a nonprofit organization dedicated to honoring anglers, manufacturers, innovators and media who have furthered the sport of bass fishing. On display in the museum are artifacts, photos and biographical information about 71 members of the Hall of Fame who have been inducted since 2001

“Our first Induction Banquet and the grand opening of the new Hall of Fame facility at Wonders of Wildlife was incredibly successful, attracting both pioneers and current leaders of our sport as well as anglers and fans who are passionate about bass fishing,” said Donald Howell, BFHOF Board president.

“We are expecting a sell-out crowd on Sept. 27 as we honor the newest members of the Hall of Fame.”

Tickets to the banquet and information about the Hall of Fame and its mission are available at Bassfishinghof.com.

Berkley Bedell — Born in Spirit Lake, Iowa, March 5, 1921, “Berk” Bedell began tying flies with dog hair and selling them to trout fishermen as a source of Depression-era income while he was still in high school. After serving in the U.S. Army during World War II, Bedell began to expand his Berkley & Co., positioning it to become one of the largest fishing tackle companies in the world. The company launched Trilene fishing lines and added or acquired numerous other brands over the years. Bedell was elected to Congress in 1977 and served five terms. His son, Tom, served as CEO of the company, which became known as Pure Fishing in 1979.

Dr. James A. Henshall — Henshall (1836-1925) was the author of the first book on bass fishing, Book of the Black Bass in 1881, and was the sport’s earliest advocate of note. A surgeon by trade, he designed the most popular rod and reel of his day, though he chose to patent neither because he believed his creations should be available to all manufacturers and anglers. He was also an innovator in hatchery management during his time with the U.S. Fish Commission. Henshall predicted the decline of trout fishing and habitat as well as the rise of the bass in sportsmen’s eyes. Though he wrote extensively for several outdoor publications even to the end of his long life, he is probably best remembered for a single line in bass book: “I consider him, inch for inch and pound for pound, the gamest fish that swims.” It is still the greatest comment on the greatest of game fish.

Tommy Sanders — When one thinks of bass fishing television, Tommy Sanders rises to the top. The smooth, witty announcer has been the face of B.A.S.S. on television since 2000. Sanders is synonymous with outdoors TV, gracing ESPN Outdoors for more than a quarter century. Jerry McKinnis, a model of longevity with 44 years of The Fishin’ Hole, said he believes Sanders holds the distinction of appearing on the network more than any of the thousands of other personalities. Besides starting FLW coverage, Sanders has hosted Stihl Timbersports, the Great Outdoor Games and the wraparound segments for the ESPN Outdoors block. But he’s mainly known as the host of The Bassmasters, where he has earned numerous awards. Recently inducted into the Arkansas Outdoor Hall of Fame, Sanders is also known for his recent work as host of “Bassmaster LIVE” and “The Livewell.”

Helen Sevier — Sevier devoted three decades of service to the fishing industry, first as executive vice president and, from 1986-2001, CEO of B.A.S.S., Inc. Under her leadership, B.A.S.S. grew to 600,000 members worldwide and conducted the world’s most prestigious fishing tournament circuit. She worked tirelessly to promote sport fishing and conservation, creating the Bassmaster Casting Kids program, which has introduced millions of youngsters to fishing, in 1991. Sevier helped found the American Sportfishing Association and served on numerous industry boards and councils. Among her awards: the William E. Ricker Resources Conservation Award by the American Fisheries Society (1987), the U.S. Department of the Interior’s Conservation Service Award (1997), and the Norville Prosser Lifetime Achievement Award from the ASA (2002). She was inducted into the National Freshwater Hall of Fame in 2004.

Gary Klein – He has been involved in the bass fishing industry at the highest levels for almost 40 years. During that time, Klein has fished in more than 400 Bassmaster tournaments, helped create the Major League Fishing television show, won two B.A.S.S Angler of the Year awards, made 30 Classic appearances and recorded eight victories in B.A.S.S. tournaments alone. Klein has won the U.S. Open and a gold medal in the ESPN Great Outdoor Games. He has known no other job except as a professional bass angler. While the idea of young anglers leaving college and becoming a full-time professional is commonplace today, Klein was the first to make professional angling his first career when he started fishing at the age of 19. After four decades of competition, he is considered one of the top anglers in the world.

Kevin VanDam – VanDam is one of the most recognized names in bass fishing as the all-time money winner with B.A.S.S. (more than $6 million). His initials are the most-feared in bass fishing as KVD has won four of the 27 Bassmaster Classics in which he’s competed, has a record 25 B.A.S.S. wins and has seven Bassmaster Angler of the Year titles. He was the first-ever winner of ESPN’s “Outdoorsman of the Year” ESPY trophy. During only four years with the FLW Tour, he finished in the top 10 nearly 30 percent of the time, pocketed more than $370,000 in winnings and appeared in four Forrest Wood Cups. In addition to his fishing accomplishments, VanDam is a philanthropist through his KVD Foundation as well as contributions in the KVD Charity Classics with the Detroit Lions, Michigan hospitals, March of Dimes and the Make-A-Wish Foundation.

Chambers, a famous iconic lure designer, was diagnosed with a rare form of Mantle Cell Lymphoma. After undergoing treatment for a short time, complications arose which eventually took its toll.

Striving for perfection is how he built Zoom Bait Company. Chambers started Zoom in his backyard as a hobby, which included countless hours after his day job. It began in a one-horse barn with sawdust floors. This became the foundation and backbone of Zoom Bait Company, which was founded in 1977.

Zoom was family owned and operated since day one. As the saying goes, behind every man is a great woman. Faye Chambers stood by his side making countless sacrifices in the early days as the company was just getting started. Often, she was found on the living room floor bagging worms and loading their station wagon, so she could deliver them to UPS.

The company began to grow with the help of close friends and fellow fishermen from the Athens Bassmasters. Eddie Wortham, while still in high school, was the first employee hired by Chambers. Today, Wortham still works at Zoom as General Manager.

In 1988, Chambers realized that his hobby had turned into a big business.

At this point, Chambers believed it would take the entire family to make this work. Eddie Jr., graduated from UGA and returned to the family business, while younger sister Kym pursued a nursing career. Kym graduated from college and worked as an RN for several years. Eventually, she joined Zoom to fill her motherís shoes, when Faye decided to retire.

Chambers was a humble man, who never saw himself as famous. He was completely content working seven days a week seeking constant perfection.

This was evident in his second hobby, making handmade balsa crankbaits.

W.E.C. Custom Lures was his passion. W.E.C. was born around 1992 and, by the mid 90ís, was in full swing. With the help of close friends, Chambers developed many crankbait models that are highly sought after to this day.

All who knew him will miss Mr. Chambers, but for us here at Zoom, we are honored to have had such a wonderful leader, mentor and friend.