Arey: How to Choose Jig Size 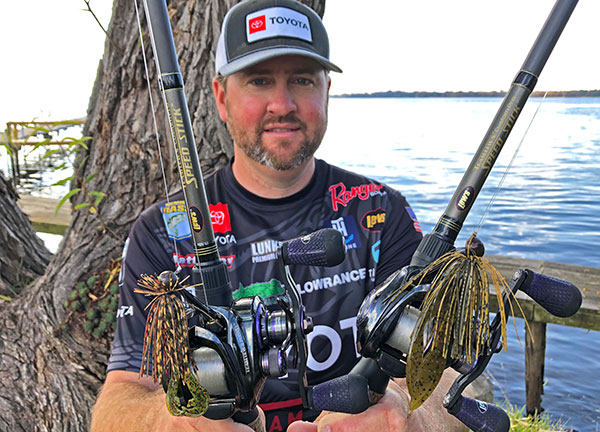 Choosing jig sizes can cause as much contemplation as a burger joint drive-thru lane. Do you get the single patty from the value side of the menu to conserve fat calories and cash, or do you go all-in and get the double burger with bacon to leave you gut-stuffed and grinning?

Both serve a purpose, but like bass fishing jigs, one must choose the right-sized meal for the conditions at hand – and sometimes that’s a struggle. Thanks to Team Toyota’s Matt Arey, picking the perfect sized portion just got a whole lot easier.

Billy Chapman, Jr., founder and owner of Anglers Inn International, reports that the fishing is hot at Lakes El Salto and Picachos. Both of Fishing Hall of Famer Chapman’s resorts are now fully open after a reduced season this spring and summer.

“As you may recall, when we elected to temporarily close down our facilities, we were experiencing an incredible March bite at both lakes,” said Chapman. “We weren’t sure what would be going on when we reopened in mid-summer. Well, the lack of pressure made things even better. It was like fishing two new lakes. Our July groups were treated to some of the best numbers we’ve seen in years. Then the typical rains came in August and September, bringing the water levels back up and providing an additional dose of fertility. So when we started hosting anglers again in October and continuing now as we end the year, we were thrilled to learn that things had continued in that same upward trajectory.”

For more than a decade Mark Zona has been one of the most recognizable and respected names in the fishing world, known for his efforts as a color commentator on The Bassmaster Elite Series and Bassmaster Classic and his own Zona’s Awesome Fishing Show.

Beginning in 2021, Zona will be representing Lew’s rods and reels. Already a member of the Rather Outdoors family with his long-standing relationship with Strike King, Zona will join a promotional staff that boasts some of the most accomplished names on the water, bringing his own unique flair and list of accomplishments to the team.