The Covid-19 crisis has certainly turned our lives upside down but fishing is offering a temporary escape.

However, anglers must remember the situation is evolving and more changes could be made.

For example, Indiana banned all tournaments last week. Michigan previously allowed golf courses to be open but shut them down Friday. At the time of this writing, some Indiana courses remain open.

When you go fishing, it is recommended that anglers fish alone or with immediate family members to avoid any close contact with someone outside the family who may unknowingly be carrying the virus.

The state of Washington shut down fishing when it was noticed that anglers were fishing too close together. We don’t want that to happen in our area, so do your part.

If you’re looking for a silver lining in these trying times, go fishing.

At the time of this writing, South Bend and St. Joseph County officials had issued an advisory urging people to stay home except for essential travel. Therefore, use your own discretion based upon local laws and advisories.

Also at the time of this writing, all boat ramps in Indiana and Michigan were open, contrary to some rumors. Tackle shops were doing their best to keep doors open as well.

And some more good news; Michigan announced it’s waiving the need for the Recreation Passport for entry at state parks and other destinations, to include boat ramps, during the COVID-19 situation. However, you may find restrooms and other facilities closed.

If you can get out, your chances of catching fish are improving. The fish are waking up from winter and starting to prowl. That includes steelhead in the river and panfish in the lakes.

The steelhead have been pouring into Indiana waters of the St. Joseph River. Lake Michigan fisheries biologist Ben Dickinson said 3,177 steelhead have passed over the South Bend ladder this month. More than 1,200 of those moved up last week. 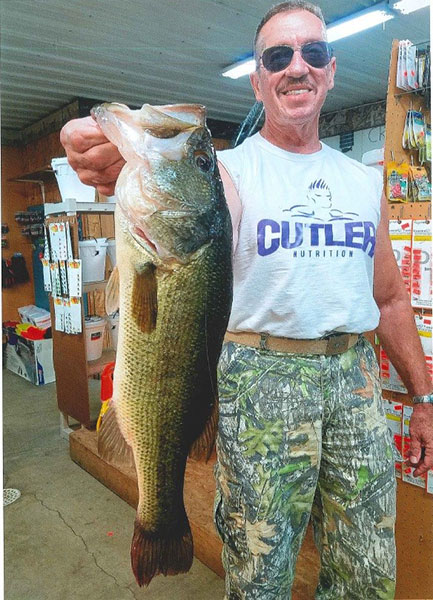 But the dude can catch big fish.

Just look at his success last year, when he won the Indiana DNR’s Largemouth Bass Fish of Year Division with a 26.50 incher. In fact, he had the second best entry as well, a 26 incher. Both were caught from Bruce Lake in Fulton County.

But that’s not the story here. Holbrook swears he’s caught bass bigger than the state record (14 pounds, 12 ounces, caught in southern Indiana in 1991).

“I was at a sport show and saw a (replica) mount of the state record,” he said. “I looked at that thing and said, ‘shoot, I’ve caught bass bigger than that’.”

In fact, he claims he lost one at the boat last season when the fish tangled in his anchor rope.

“That was the only time I cried during fishing,” joked the retired Winamac angler.

Big bass catches aside, what sets Holbrook apart from most bass fishermen is his willingness to share his secrets with anyone who will listen.

“When I watch guys in bass boats while I’m fishing, I just shake my head,” he said. “They aren’t fishing the way you have to fish to catch big ones. Believe me, that’s all I fish for - big ones.”

He figures he’s caught more than 2 dozen bass over 20 inches the past four years using the same system. And while Bruce Lake is his “home” lake, his approach has produced big fish in other lakes, too.

And not just bass.

“I caught five muskie on it while fishing for bass,” said Holbrook. “One of those I caught last year measured 45 inches.”

So what’s his secret?

Where he fishes is a big part of it. Like a lot of anglers, he fishes lily pads, but his approach is different.

“Most anglers cast lures along the edge,” he said. “My boat (12-foot Creek Boat) is a shallow draft so I get back into the pads and look for those openings – or holes – that are far inside the outside edge.”

Holbrook says that’s where the big fish live unmolested – until he comes along.

“Most people don’t want to make the effort to get back there where these fish live,” he insisted.

He positions his boat on top of the pads, casting to the edges around the openings. He fishes every inch of it.

“Those fish are lazy and will just sit there staring out into the opening waiting for a bluegill or some other unsuspecting creature to come along,” he described.

He believes his lure presentations are another key to his success. He has two 7-foot, medium heavy Johnny Morris spinning rods rigged with Okuma C-30 reels spooled with 20-pound braided line.

The braid is attached to a foot-long steel leader which is snapped to the weedless hook in the worm. 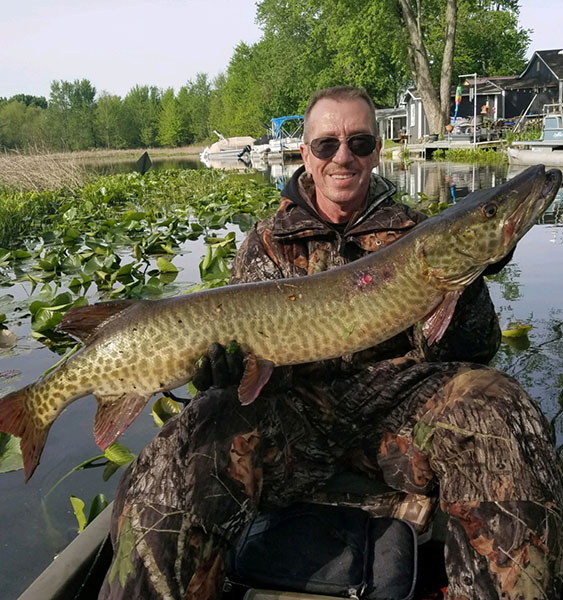 “Because of all the big pike and muskie I hook, I need that steel leader,” Holbrook explained.

Both rods are rigged differently although both are weightless and utilize a 3/0 weedless hook and a 10-inch soft plastic worm. His favorites are made by Big Bite or Mr. Twister in green pumpkin. 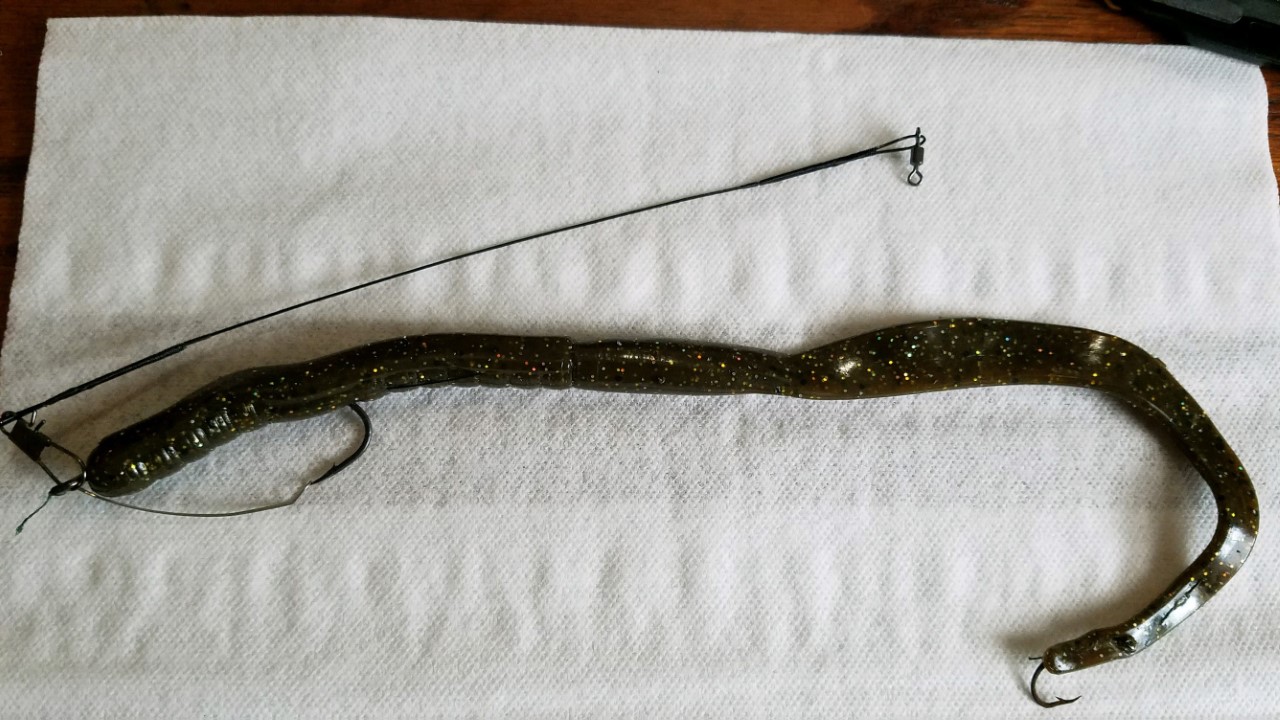 “I will work a traditionally rigged worm at first, but if I get a bite I will drop the rod and watch for the line to move,” he said. “If nothing happens after about 30 seconds and if I don’t feel anything, I will wind in and pick up the other rod.”

The second rod is rigged with the same worm, but it has a stinger hook in the tail, a rig he fashions before he heads to the lake.

Holbrook says bass oftentimes grab just the tail of the worm. And because the fish are big, they often don’t move the line right away. He will lift gently on the rod to feel any pressure; if there is, he sets the hook.

He believes that jerking too soon or missing the strike on the hook-set can spook the fish and ruin your chances. 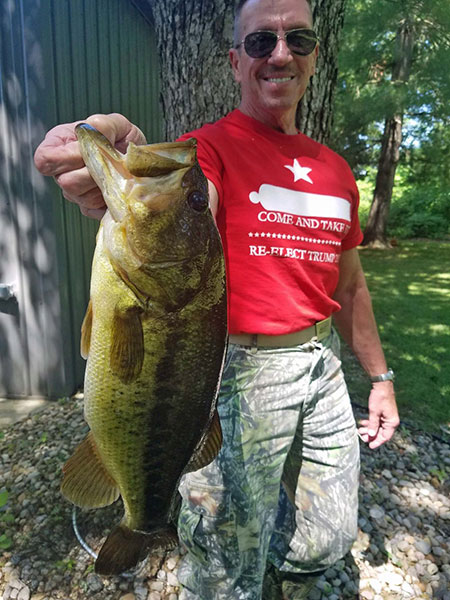 “With the stinger, I rarely miss,” he said.

“I honestly don’t know much about fishing out there, although I have friends who have depth finders and fish that way,” he said. “I’ve never had any reason to go out there.”

And given his successes, why should he?

I knew it was going to be a tough day.

First, there was the issue of answering an alarm clock at 4:30 a.m.
Haven’t done that since last summer.

Then there was the outside thermometer that read 18 degrees. A check of the day’s forecast showed it wasn’t going to get much better than that.

But I had committed to friend Scott Crocker who had a ride on a St. Joseph River Charter Boat and wanted me to tag along.

Now, I’m not going to lie. Winter fishing for trout and salmon isn’t my thing. But the winter had been long and I spent most of it lounging in my recliner watching sports.

It was time to get outside.

We drove through darkness to Shamrock Park near Berrien Springs, Mich. where we would meet Captain Mike Frank of Dial-in Charters. Frank, who guides 130 days a year, was taking a busman’s holiday and invited us along.